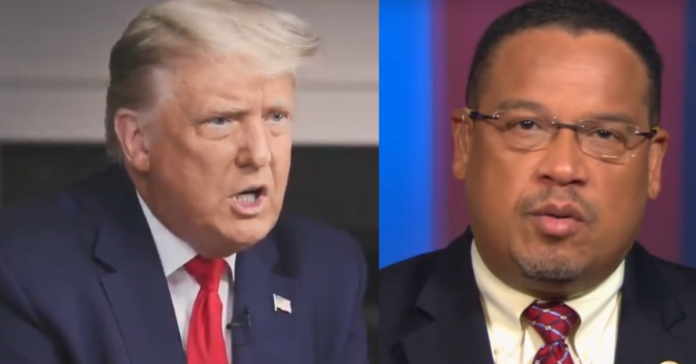 “Thanks to the free speech-stifling dictates of Gov. Tim Walz and Attorney General Keith Ellison, only the first 250 people will be admitted,” the Trump campaign said in a statement sent late Thursday night after being forced to relocate their planned MN rally.

“Without question, Minnesota Democrats had hoped that the President would simply cancel the event, but he will not allow partisan politicians to deprive people of their First Amendment rights to gather peacefully to hear directly from the President of the United States,” the statement continued.

Trump had been planning on a 6,000 person rally but the state is limiting crowd sizes to just 250 people. Trump blamed Minnesota Attorney General Keith Ellison.

Ellison said in a statement:

“It’s everyone’s responsibility to stop the spread of COVID-19. My office, along with the Department of Health and the Department of Labor and Industry, has worked evenhandedly with 80 events of all kinds in every corner of Minnesota to educate them about their responsibility to hold safe events and help them comply with Executive Order 20-74 and state laws designed to keep people safe from the spread of COVID-19.

“Overwhelmingly we have found Minnesotans willing to comply to keep people safe.

“Yesterday my office, along with MDH and MDLI, participated in a call with officials from the City of Rochester, Olmsted County, and the Rochester airport, and a representative of the RNC. We and our State partners educated them on their responsibilities for holding a safe, compliant event. After the call, we asked the RNC in writing for a COVID preparedness plan. We did not receive a response.

“This morning, upon hearing the event was moving to Dodge Center, we asked the Trump campaign and McNeilus Steel for a COVID preparedness plan. We did not receive a response. Now we have learned the event has moved again. We did not cancel this event: indeed, we have no authority to cancel events and have never cancelled an event.

“Yesterday Minnesota set a single-day record of 2,900 new infections and a near record with 32 deaths.

Keith Ellison Restricts Freedom of Assembly of Political Opponents https://t.co/WAPPsfQrWk via @BreitbartNews We were planning for as many as 25,000 people in Minnesota. Now the Governor, at the last moment, will only allow the first 250 people to attend. Riots plus Omar = WIN!

DEVELOPING: The Trump rally is apparently moving back to the Rochester airport and limited to less than 250 people. The owner of one of two Dodge Center businesses planning to host the event say they got word from the Secret Service after setting up stands for 6,000 people. pic.twitter.com/p2JsuPmKaM