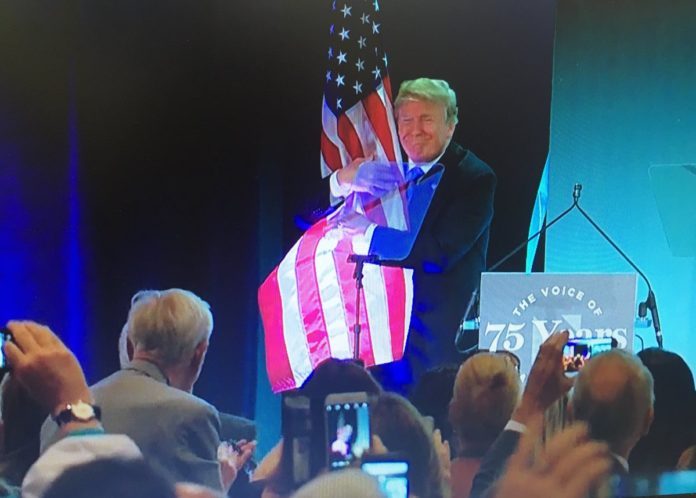 President Donald Trump just put his political enemies on notice. There is indeed a new sheriff in town.

Get used to it Pelosi because Trump isn’t going anywhere fast.

Speaking before the National Federation of Independent Businesses today, Trump brought down the house and silenced his critics in a free-wheeling speech.

Trump may be a better communicator than even Reagan.

“All we need is good legislation and we can have it taken care of,” Trump said. “These are crippling loopholes that cause family separation, which we don’t want.”

“Mexico does nothing for us,” said the president. “Try staying in Mexico for a couple of days and see how long that lasts”

“I don’t want children taken away from parents. And when you prosecute the parents for coming in illegally, which should happen, you have to take the children away.”

“These countries that we give tremendous foreign aid to in many cases, they send these people up & they’re not sending their finest. Does that sound familiar? Remember I made that speech and I was badly criticized? Turns out I was 100% right and that’s why I got elected.”

“Remember, I’d go around & say what you have to lose? The Democrats have always been with you, vote for me, bad education, the most unsafe parts of the country.”

China: “They’ve taken so much. It’s time. We are going to get smart & we’re going to do it right & we are actually getting a lot of support, but we have to do something. Maybe something happens where they come in they say ‘we agree, it’s been unfair'”

“People and are able to go around and look for jobs. They’re just not taking the job and they hate, hate it. Hate to wake up in the morning. They don’t want to go to work. Now they’ve got their choice. They have jobs that they can look and they can love.”