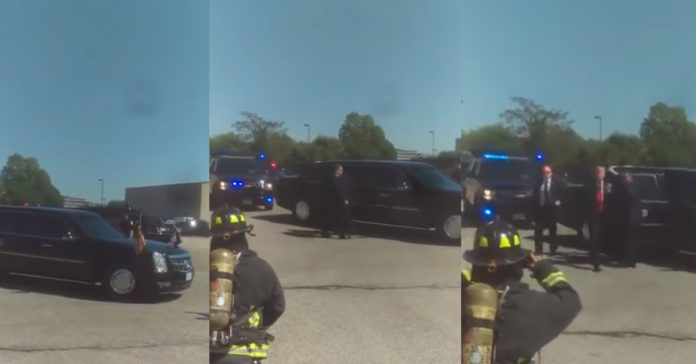 Wow. President Trump continues to impress. How that man has time to do all the things he does as well as spend as much time as he does with the average Americans.

Trump shuns the big money crowd because he doesn’t need their money, he would rather have the respect of hard-working men and women.

And he certainly got the respect of these brave firefighters today.

President Trump stopped his motorcade just before pulling up to Air Force One and climbed out of his limousine to greet a couple dozen flabbergasted firefighters.

In a video, when “The Beast” (as his car is known) suddenly stops, two Secret Service agents walk up to the window. It’s unclear if they’re trying to discourage the president from getting out or simply making a quick plan for his impromptu stop.

One firefighter had been filming the motorcade as it rolled in. As the agents talk with the president, one firefighter says, “No he’s not…” and laughs nervously.

Then Trump climbs out, applauding the firefighters as he walks toward them.

“Thank you, men, thank you,” Trump says as he shakes their hands, going down the line. The firefighter filming the video says, “That’s awesome!”

Trump then gathers the firefighters together — “c’mon” — for a group photo in which he gives the thumb’s up. Others grabbed some quick selfies.

We’re not sure where this happened or when. It didn’t make the news and only appeared on social media today. There was no mention of the stop, either, in recent White House pool reports, filed by reporters who travel with the president everywhere he goes.