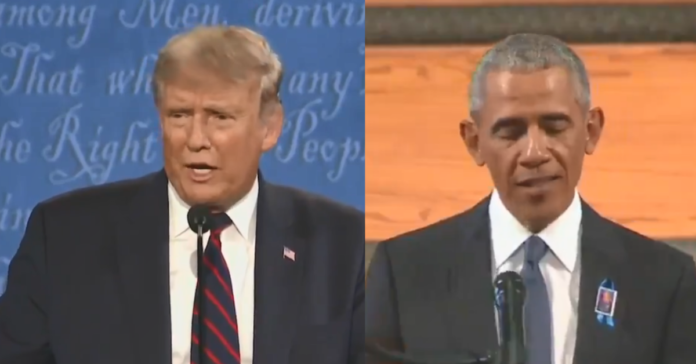 President Donald Trump issued a warning to former President Barack Obama over his plans to get out and campaign for Joe Biden.

Trump welcomed the plan calling it “good news” before warning that Obama getting back in the game and stumping for his former Vice President in the final weeks of the 2020 campaign will backfire.

“Well, that’s good news,” Trump said. “He campaigned harder than Hillary Clinton did for Hillary, and it just made us stronger.”

Trump then mocked Obama and Biden over the timing of Obama’s endorsement of Joe:

President Barack Obama will hit the campaign trail next week on behalf of Democratic presidential nominee Joe Biden, adding a potent voice to the Biden campaign’s efforts to increase turnout and enthusiasm in the final days of the 2020 presidential campaign.

Obama is scheduled to appear at an event for his former vice president and close friend on Wednesday, Oct. 21, in the battleground state of Pennsylvania, according to a release from the Biden campaign.

The event in Philadelphia will mark the first time Obama has campaigned in person for Biden this year.

The former president has appeared in Biden campaign videos, however, and he gave a keynote address at the virtual Democratic National Convention this summer.

Nearly four years out of office, Obama remains among the most popular figures in American politics, according to polls.