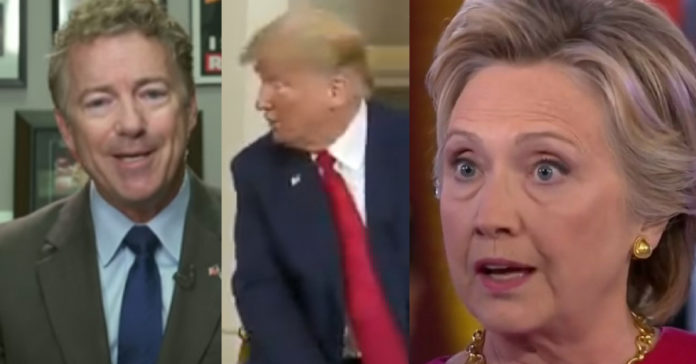 Rand Paul just dropped the hammer and earned Trump’s gratitude with his blistering attack on the attempts to bring down President Trump.

Look, the whole political world is in chaos right now but we have been in tighter spots before.

One thing both sides should agree on is getting money out of politics, that would remove much a lot of our problems.

Until then, we have Rand Paul.

From The Daily Wire

Paul has been a fierce defender of the president as Trump faces backlash from both sides of the aisle for seemingly suggesting he did not believe U.S. intel agencies about Russian meddling in the 2016 election — though he walked back the remark on Tuesday.

The senator suggested Trump made the unclear comment because he couldn’t, or didn’t want to, differentiate between the bogus allegations of Trump-Russia collusion, of which there is no evidence, and general Russian meddling.

“The president sees the Mueller investigation; he sees all these accusations from partisan Democrats, Hillary Clinton, saying ‘Oh, he colluded with the Russians,'” explained Paul.

“The only people who we actually know colluded with the Russians were Hillary Clinton who paid a British agent who paid Russians for information for the dossier,” he declared, referencing the so-called “Steele dossier” which was funded by Hillary and the DNC.

“He feels like the intelligence community cooked up a political and partisan investigation, but, also, part of the Mueller investigation is something that should have investigated and that is: Who hacked into Hillary Clinton’s emails?” he continued.

“There is part of the Mueller investigation that is legitimate and part of it that is a partisan attack on the president,” said Paul, adding that Trump is responded to the part about Trump-Russia collusion.