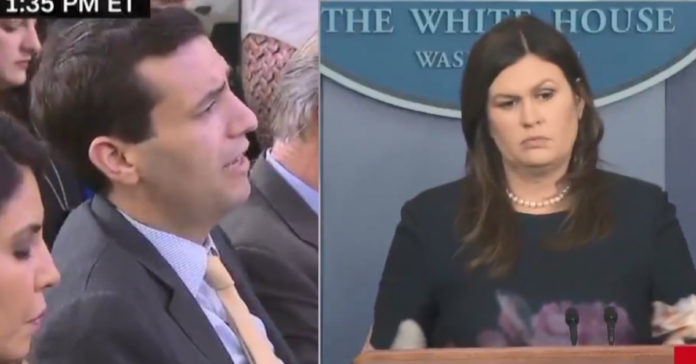 The media was all tied up in knots after Sarah Huckabee Sanders and the White House had not had a press briefing in a few weeks.

They huffed and they puffed and they tried to blow down the house but they failed – plenty of other administrations have had battles with the media and plenty others have limited access.

For example, Barack Obama ran a prolonged and ferocious campaign against leakers and journalists were under constant fire to reveal their sources.

I believe the Obama administration even prosecuted a few.

Imagine if Trump tried to pull half of the stunts Obama pulled and you will begin to understand the media bias.

Enter Sarah Sanders. She gave a brilliant and blistering response to a dumb question about Trump, Twitter, and Jeff Sessions.

Sanders said the tweet was not an order, but rather just Trump’s opinion.

“It’s not an order. It’s the President’s opinion, and it’s ridiculous that all of the corruption and dishonesty that’s gone on with the launching of the witch hunt, the President wants to — has watched this process play out. But he also wants to see it come to an end as he stated many times. And we look forward to that happening.”

Asked later whether Rudy Giuliani was advising the President on the matter, Sanders declined to say, but reiterated, “The President is not obstructing, he’s fighting back.”

She said Trump was “stating his opinion” and “stating it clearly,” noting that Trump was “expressing frustration” with corruption from officials like James Comey, Andrew McCabe, and Peter Strzok.

(VIDEO) You Got HUCKED! Sarah puts CNN Spray-Tan Crybaby on Notice! Next WH Press Sec. Opens a Can of Whoop-A$$!

Thank You Sean Spicer! Job WELL DONE! Looks who’s up next! Can we get a BIG H**L YEAH?