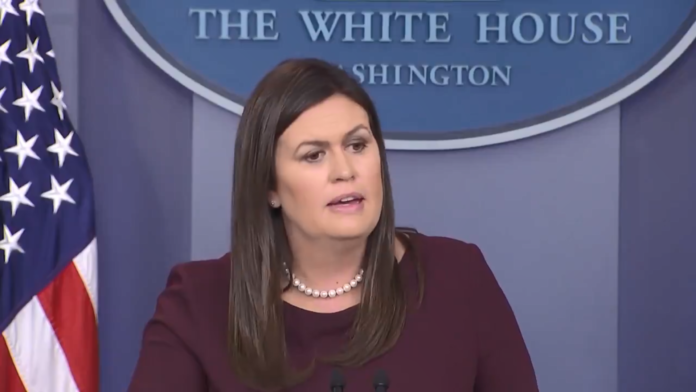 Look the sad truth about this whole Omarosa affair is she is a known piece of garbage and only the media is taking her seriously.

Heck did you hear what the Clinton/Gore people said after they too fired her? They called her the worst hire they ever made – said she was absolutely toxic to work with.

So we must all remember that truth as the media crowns her the new queen of credibility.

Or they tried to make her credible until Sarah embarrassed them today.

As reported by The Daily Wire:

“What is the strategy in continuing to respond to the charges in this book?” a reporter asked Sanders about President Trump. “Why doesn’t he just ignore it?”

“Frankly I think most of America would be happy to ignore it but unfortunately the individuals in this room continue to create a large platform for somebody they know not to have a lot of credibility, for someone they frankly refused to give a platform to when they worked here at the White House,” Sanders responded.

“It wasn’t until this individual started to negatively attack this president and this administration and tried to tear this entire place down that she received the type of platform and roll out that she’s getting,” Sanders continued. “I think it would be great if every single person in this room and every single person in the administration never had to talk about this again and we actually got to focus on the real policies and the real things that matter not just to people in this building but certainly all Americans.”

Sarah Sanders slams the media for giving Omarosa a large platform to attack the Trump administration when they know she isn't credible. pic.twitter.com/LyLqX08Phq

(VIDEO) You Got HUCKED! Sarah puts CNN Spray-Tan Crybaby on Notice! Next WH Press Sec. Opens a Can of Whoop-A$$!

Thank You Sean Spicer! Job WELL DONE! Looks who’s up next! Can we get a BIG H**L YEAH?