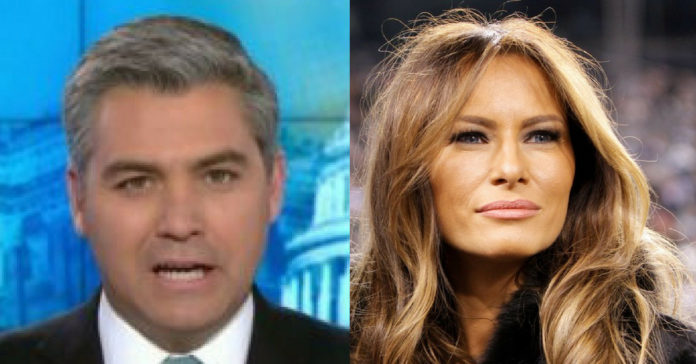 So the media fails again…why do they even bother trying any more with their gossip mongering?

They seek to start rumors and shape narratives with stories with hidden sources and clever denials.

It is true they have met their match with Trump which may explain why they have been attacking Melania of late.

After The New York Times ran a story that said Trump tells her what to watch on TV, and after every single network including CNN and MSNBC doubled down on the BS story to make Melania look bad, Melania proves she is no slouch either and just hit back hard.

First lady Melania Trump will watch “any channel she wants,” according to her spokeswoman in an apparent rebuke to the report President Donald Trump was upset to find her Air Force One television tuned into CNN.

East Wing communications director Stephanie Grisham told CNN Wednesday everyone should be focusing on the issues the first lady is seeking to highlight, such as neonatal abstinence syndrome, rather than what television channel she’s watching or a tape of her husband discussing a payout to a woman who claims to have had an extramarital affair with him.

“Did you know that every 15 minutes a baby is born with NAS? Maybe you’d like to talk about the 160,000 kids who skip school every day for fear of being bullied, or that 280,000 students are physically attacked in schools every month,” Grisham said. “Seems kind of silly to worry about what channel she watches on TV (any channel she wants btw) or if she heard some recording on the news.”

The comment about which channel Melania Trump watches on television is a response to a New York Times story that indicated the President was upset that his wife had CNN playing on Air Force One when the two were traveling last week.