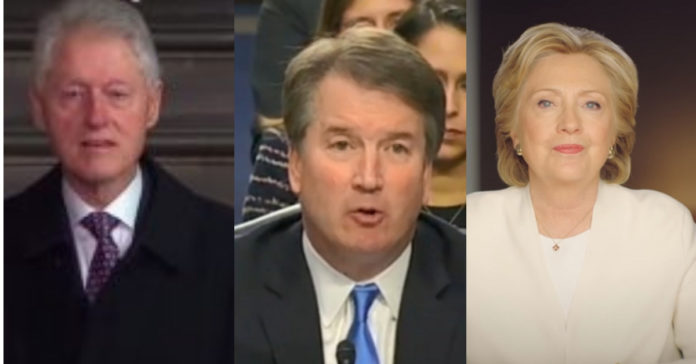 Hillary Clinton just cannot help herself. She has a disorder that makes her believe she must weigh in on the subject of the day as if anyone cares what she has to say.

We don’t. Even the liberals want her to go away already.

She went on Rachel Maddow’s show last night and went after Brett Kavanaugh. It didn’t end well for her.

As reported by The Daily Wire:

Republicans have offered Kavanaugh’s accuser, Christine Blasey Ford, the chance to testify in a public or private hearing on Monday, an offer her lawyer currently says she will not accept, demanding an FBI investigation first. An investigation into Ford’s accusation by the FBI, Clinton told MSNBC, is “a reasonable request.”

“The White House could answer [Ford’s request] very quickly by asking the FBI to reopen its background check and to take into account the accusation that’s been made and to gather the evidence about what can be known. So far, they haven’t done that,” she said. “And as someone who has watched this process unfold over many years, there does have to be some direction given to the FBI to pursue an investigation.”

Clinton’s comments have elicited some strong responses, including from Bill Clinton accuser Juanita Broaddrick, who maintains that Bill raped her and Hillary threatened her to remain quiet:

The IRONY……@HillaryClinton will go down in history as the most deceitful and dishonest villain in America. https://t.co/8iuCiws2Ed

If you want the FBI to go back that far @HillaryClinton @MSNBC to investigate Ford’s allegations…. let’s investigate my RAPE allegations against Bill Clinton, too. Seems only fair.

"HILLARY CLINTON: KAVANAUGH’S ACCUSER DESERVES ‘THE BENEFIT OF THE DOUBT’"