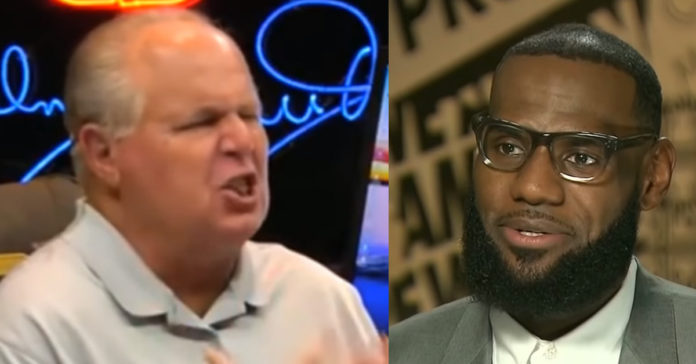 LeBron James ran his mouth at President Trump on CNN (shocker). Thankfully, Rush Limbaugh was at hand to speak truth to liberal power.

Los Angeles Lakers superstar LeBron James told CNN’s Don Lemon on Monday that he sometimes feels like the country under President Donald Trump is “going back to places of… some kind of slavery or Jim Crow.”

Lemon asked the three-time NBA champion who has appeared in the last eight NBA Finals if he ever looks around and gets “down and depressed” when he “see’s what’s happening in the country” or thinks “we’re going backwards.”

Yes. Absolutely. I mean, that is human nature. There is no way that you can look at certain things and not feel like, why are we not pushing forward? You know, for me, as one of the leaders of America or one of the leaders of my community, it’s my responsibility to kind a stay as positive as I can and continue to let people know that we can go further up and not down even though sometimes we do feel like we’re going backwards and even though we feel like we are going back to places of—some kind of slavery or Jim Crow and things of that nature, you don’t—you just want to kind of continue to move forward and I think it is very important for all of us.

“Then when I am driving in — I didn’t tell you this — I hear that LeBron James (LeBron James!) did an interview on CNN. You know the noted political expert, LeBron James? LeBron James says that President Trump is using sports to divide the nation. Really? LeBron James! At least Michael Jordan knew that Republicans buy sneakers too.

So while he wanted to sell sneakers, Jordan for the most part steered away from this stuff, even though he’s a dyed-in-the-wool Democrat and leftist. But LeBron James… Look, I know we have freedom of speech; anybody can say what they want. But the man has no political education whatsoever. But there he was on CNN. He was on there with Don Lemon. Of course, he’s serving the exact purpose that CNN wants. Here’s some famous athlete railing against Trump, and it’s supposed to bring all the other dead-brain dolts that watch that network right along into the fold, that Trump is an idiot, that Trump’s dividing the nation with racism.

May I ask, “Who started this?”

Who started this business? Who decided to start taking a knee and disrespecting the national anthem? That would be a guy named Colin Kaepernick, right? And then who decided to join him? A bunch of other athletes, some buddies on the San Francisco 49ers and some other NFL teams. I don’t care how you slice it. When the national anthem is being played and the flag is being hoisted and you do anything that looks like you’re protesting that, it’s gonna be properly understood as you are protesting America. You’re protesting the flag and people who protect it such as the U.S. military.

Add the fact that you are playing a game, although risky, for which you’re being paid millions of dollars. It just doesn’t quite follow that America is this gigantic, oppressive, racist place. But there he is, LeBron James, and he’s on there with CNN with Don Lemon saying the president Trump is using sports to “divide” the nation. “[Trump]’s kinda used sports to kinda divide us, and that’s something that I can’t relate to,” said Professor James.

“From the controversy over NFL players kneeling during the national anthem to selective teams’ invitations to the White House, NBA superstar LeBron James believes President Donald Trump is using sports to create division throughout the country.” Well, now, the way I saw it Donald Trump was minding his own business. One day, he decided to run for president — and despite all the odds, he won. A whole bunch of hateful feel spraining up the moment Trump announced and started saying some of the most horrible, vilifying things toward Trump and his family.

But Trump was minding his own business one day until the Kaepernick incident happened and then other NFL players picked it up and then other athletes decided to get in on the action and say to the media, “Hey, cover me! Cover me! I’ll also diss America if that’s what it takes to get coverage.” So they do it, and Trump reacts. So Trump reacting to these spoiled brats being used as political tools by left-wing activists like CNN and others. Trump is accused of using sports to divide the nation. Trump didn’t take the knee. Trump didn’t disrespect the flag.

Trump didn’t try to get other people to join him in kneeling while the anthem was being played. All Trump did was call out the people who were doing it, and now we have LeBron James accusing Trump of using sports to divide the nation. It’s the left, and LeBron James is one of those — to the extent that he knows it. He’s a Democrat; so he’s a leftist. They are the people dividing the nation. That’s their objective. That’s their purpose. They don’t like America, as founded.

They’re fed up with it because of all the imaginary injustices that they think America represents. So they are hell-bent on doing whatever damage to America, or at least displaying a lack of solidarity with America. Another example of leftists accusing their opponents of what they themselves are doing! It’s right of Alinsky’s Rules for Radicals — which I’m sure LeBron James reads in the hotel during the playoffs during his spare time. I’m sure he’s an expert on Rules for Radicals. Why else would he be appearing on CNN?

What’s happening here is LeBron James is being goaded into using his sports platform to divide. Who kneeled first? It certainly wasn’t Trump.