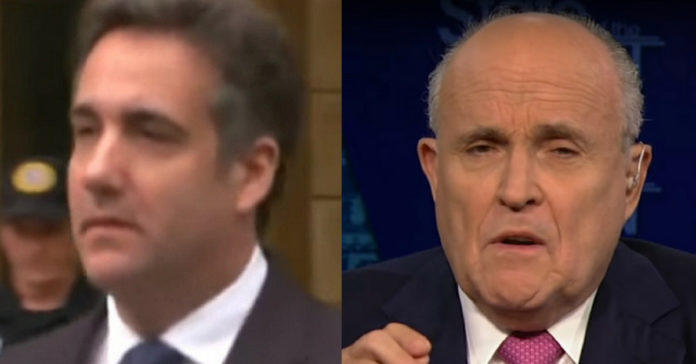 Yesterday came the not so big news from Michael Cohen that Trump was aware of Don Jr’s meeting with the Russia lawyer – that Trump denies.

First off – who cares if he was? I hardly think that is a crime let alone an impeachable offense.

Second, without tapes, it is “he said, he said.” And as Rudy pointed out, some has an embarrassing credibility problem.

On Thursday’s broadcast of CNN’s “Cuomo Primetime,” Trump legal team member Rudy Giuliani reacted to reports that Michael Cohen is willing to tell Special Counsel Robert Mueller that President Trump knew about Donald Trump Jr.’s meeting with Russians prior to the meeting and approved of the meeting by saying that Cohen has no credibility and has “been lying for years.”

Giuliani said, “I expected something like this from Cohen. He’s been lying all week…he’s been lying for years. I mean, the tapes that we have demonstrate any number of very serious lies by him back a year and a half ago, including his fooling people, hiding tape recordings, telling them they weren’t recorded, lying to their face, breaking faith with them, taping his client, which is a disbarrable offense. I don’t see how he has any credibility. This is basically if you had a trial, and there won’t be a trial here, but if you had a trial, you would say, well, which lie do you want to pick? You want to pick the first lie, the second lie, or maybe some new lie? There’s nobody that I know that knows him that hasn’t warned me that if he’s — his back is up against the wall, he’ll lie like crazy, because he’s lied all his life.”

Giuliani added no one will be able to corroborate Cohen’s story because “it didn’t happen.

“He has lied all his life… a person who is found to be an incredible liar, he’s got a tremendous motive to lie now… I don’t think anyone believes that.” Rudy Giuliani dismisses report Michael Cohen claims Trump knew in advance of 2016 Trump Tower meeting https://t.co/xd4PFYYpcQ pic.twitter.com/9gxjNGWLRA