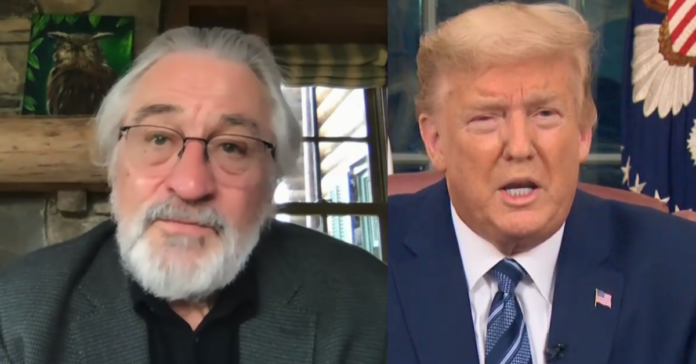 Robert De Niro is at it again and is issu9ng a new round of attacks and insults at President Donald Trump.

He said Trump’s response to the coronavirus is like being in an abusive relationship. But he was just getting warmed up – eh called Trump a fraud and a conman

“This nation has been toyed with, played with, conned to be where we are today,” the Academy Award winner said when promoting his new movie.

“When are people going to wake up and see what the fraud is right in front of our very eyes?” he asked. It should be noted that De Niro has a NOBU sushi restaurant in Moscow run by Aras Agalarov the Russian family from the Trump Tower meeting.

“You can be in a domestic abusive situation, and now we’re in a national abusive situation with a leader who is daily giving us something new to be concerned about,” the 77-year-old actor said in an interview with “Extra’s” Terri Seymour airing Tuesday.

“That’s another kind of a virus or pandemic that we are having to deal with,” said De Niro, one of Trump’s most vocal Hollywood critics, in the interview promoting his new movie “The War With Grandpa.”

Saying he can’t wait for the country to return to normal following the pandemic, De Niro added, “This virus situation could’ve been a lot less severe. I get upset thinking about it, speaking about it right now.”

ITK has learned that De Niro’s comments were made before Trump announced he tested positive for COVID-19 last Friday.

De Niro compares Trump presidency to being in an abusive relationship https://t.co/YAHfjqr4Rr pic.twitter.com/VJjLs2jeJR