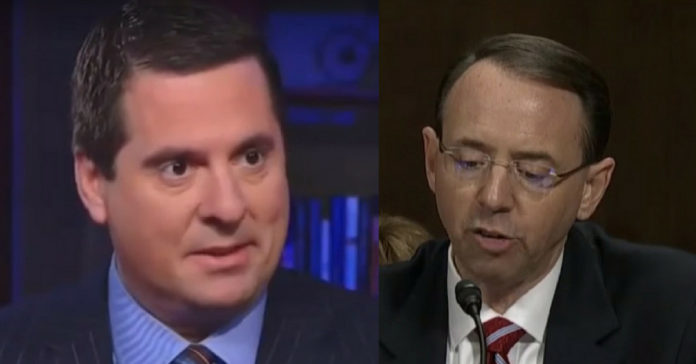 The deep state witch hunt just took a huge hit. Devin Nunes and Trey Gowdy have been all over Rod Rosenstein to comply with document requests.

The DOJ refused, delayed and did everything in their power to not do as the law requires.

We have Congressional oversight for a specific reason.

From the Washington Examiner:

The Justice Department has begun to provide documents to the House Intelligence Committee this week, following explicit threats by Republican chairmen.

A small cache of documents was given to intelligence panel staff on Tuesday, followed by another tranche on Wednesday, a congressional source told the Washington Examiner.

The exact content of those records was not disclosed, but they came on the heels of tough talk from House Oversight Committee Chairman Trey Gowdy over the weekend.

The South Carolina Republican said Sunday that House Speaker Paul Ryan led a meeting with senior Justice Department and FBI officials Friday, and claimed he “made it very clear” the House will use “its full arsenal of constitutional weapons to gain compliance” on outstanding subpoenas.

Moments later, in a separate interview, House Intelligence Committee Chairman Devin Nunes said there would be “hell to pay” Wednesday morning if the Justice Department hadn’t started to turn over documents.

A Justice Department official told the Washington Examiner that they agreed to “provide a specific documents by Friday or explain why we couldn’t.”

“That process is underway, including delivery of many of the requested documents today,” the official said.

Remember, the “stop Trump” texts were never handed over to Nunes as they should have been.

What else are they hiding? America is about to find out.