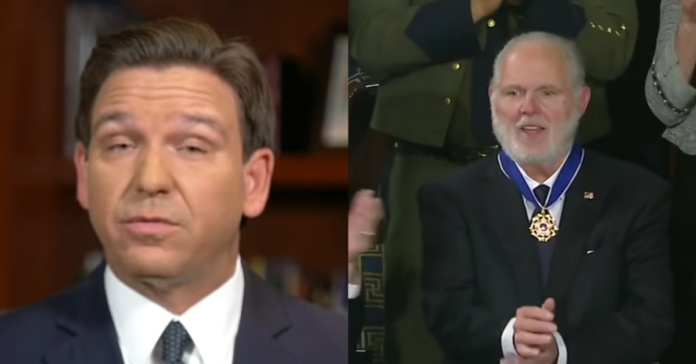 In a press conference today in West Palm Beach Florida, Governor Ron DeSantis (R-FL) said that flags will be lowered to half staff to honor Rush Limbaugh.

DeSantis said at a press conference,  “I was getting the tar kicked out of me every day and he Rush had me on the week before the election in 2018. He didn’t have a lot of guests. I was honored to be on his show a couple of times.”

“I know they’re still figuring out the arrangements but what we do when there are things of this magnitude, once the date of internment for Rush is announced, we’re going to be lowering the flags to half-staff,” the governor said.

“There’s not much that needs to be said, the guy was an absolute legend,” DeSantis said. “He was a friend of mine and just a great person.”

It's the least he deserves…
Ron DeSantis announces flags soon will be at half staff for Rush Limbaugh https://t.co/L7asvHCDyO

.@FLCaseyDeSantis and I are saddened to learn of the passing of fellow Floridian and our friend, Rush Limbaugh. My statement ⬇️ pic.twitter.com/L4GuZZNhfy

Today I sent a letter to Governor DeSantis requesting the lowering of Florida’s flags to half-staff in honor of the passing of a great Floridian—Rush Limbaugh.

Rush was a relentless champion of America and of civic engagement. May his memory live on forever. pic.twitter.com/5vXHbo9mDz