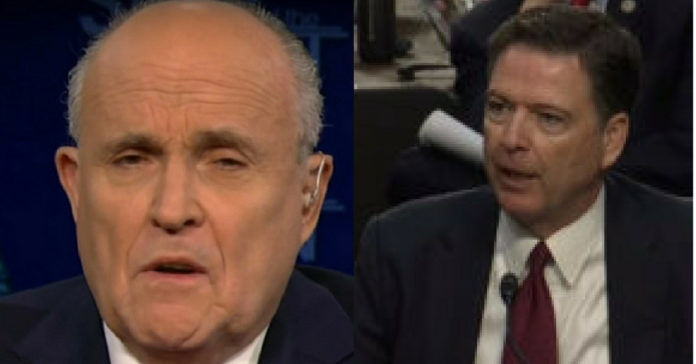 Rudy Giuliani caused a media outrage Sunday when he described the credibility of James Comey.

Rudy explained an awkward turn of phrase by explaining that if two guys are in the room and come out with different stories, who’s right and who is wrong?

It is a difficult question to be sure and the James Comey popped his head up from wherever he is hiding to bash Rudy.

As reported by The Washington Examiner: Giuliani told NBC’s “Meet the Press” that “truth isn’t truth” because Trump could have a different perception of events than those described by witnesses being interviewed by special counsel Robert Mueller, who is investigating Russian interference in the 2016 election.

Giuliani noted Comey and Trump have conflicting stories about whether they discussed former national security adviser Michael Flynn. “Donald Trump says, ‘I didn’t talk about Flynn with Comey.’ Comey says, ‘you did talk about it.’ So tell me what the truth is. If you’re such a genius,” he said.

In a tweet, Comey took aim at Giuliani without mentioning his name.

“Truth exists and truth matters,” he said. “Truth has always been the touchstone of our country’s justice system and political life. People who lie are held accountable. If we are untethered to truth, our justice system cannot function and a society based on the rule of law dissolves.”

Enter Rudy to wipe the smirk off James Comey’s face and sent him directly to the ash heap of history.

“Since proven leaker Comey is now sanctimoniously lecturing us on truth, I can say sometimes the truth is clear it’s the opposite of what Jim Coney is saying. His disgraceful performance with the FBI makes him the last person who should pontificate on truth.”

Since proven leaker Comey is now sanctimoniously lecturing us on truth, I can say sometimes the truth is clear it’s the opposite of what Jim Coney is saying. His disgraceful performance with the FBI makes him the last person who should pontificate on truth.

My statement was not meant as a pontification on moral theology but one referring to the situation where two people make precisely contradictory statements, the classic “he said,she said” puzzle. Sometimes further inquiry can reveal the truth other times it doesn’t.