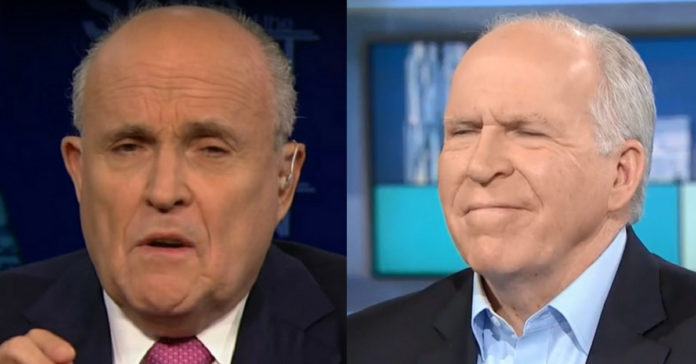 He never uses it as it is mostly an honor for past service type thing. In other words, who cares?

Yes, we have free speech and yes Trump correctly raised the issue that once you work for the cable news as a talking head you change the game from a professional standpoint.

There is a reason you only see retired guys on the news, not active guys working for the country using the top-secret intel.

So the media erupts and Brennan wants to sue Trump over a useless ceremonial thing?

It’s madness. Thankfully Rudy Giuliani is around to make sense of the chaos.

“Well, then we take his deposition right away,” Giuliani said during an interview on Fox News’ “Sunday Morning Futures” when asked about Brennan pledging to do whatever he can “personally” to prevent Trump from pulling clearances from ex-intelligence or law enforcement officials without proper cause.

“As the plaintiff, he would have to go first and I would, I mean I’d volunteer to do that case for the president,” Giuliani continued. “I’d love to have Brennan under oath for I don’t know how many days, two or three days? We’ll find out about Brennan.”

White House press secretary Sarah Sanders announced during Wednesday’s briefing that Brennan’s clearance had been pulled because he made “a series of unfounded and outrageous allegations — wild outbursts on the Internet and television — about this administration.”

Speaking to NBC’s “Meet the Press” on Sunday, Brennan mentioned that he had been contacted by a number of attorneys about possibly challenging the decision in court.