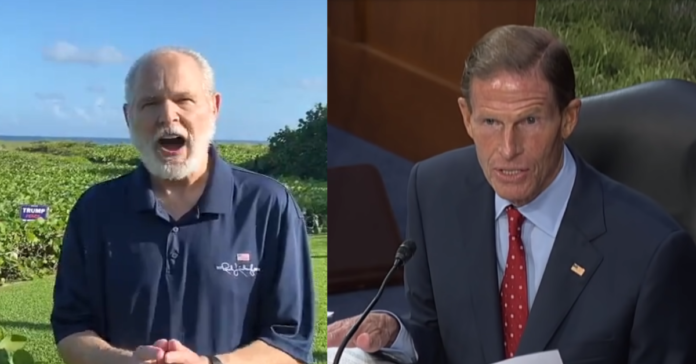 Rush Limbaugh dropped the hammer on Sen. Richard Blumenthal over his censorship comments directed at conservative publications during the big tech hearing on the Hill this week.

“He wants them to censor Breitbart more than they’re censoring Breitbart. That was his problem. His problem is they’re not being tough enough.

“It’s one more thing to block the New York Post for six weeks, but that’s nothing. You guys gotta shut down Breitbart!” This is a United States senator. Look, it might sound funny, and especially when you think of the pictures of these two guys and the picture of Da Nang Dick — who looks cadaverous, if you ask me.

“I’m so sick of being governed by a bunch of weird-looking people, I can’t tell you. Anyway, a United States senator! They swear an oath to the Constitution of United States. United States senators are asking these two guys to further censor Breitbart News. Breitbart didn’t do anything to anybody. They’re as legitimate journalists as anybody else out there.

“Remember what I said yesterday. It’s wide open out there now. The elite news people lost control over who gets to be in news and who doesn’t, and that happened starting in 1988, and then something big happened in 1997.

“Drudge blew open the Lewinsky story. Newsweek spiked it. So when Drudge did that, Drudge opened up the website world to anybody who wanted to get involved.

“So what used to be a very elite world — a very closed and restricted world where not very many people were in it controlled by the Drive-By Media — was all of a sudden open. In 1988, this program opens it up; then Drudge blows up Newsweek, goes ahead and publishes a story they won’t, and the world was forever changed.

“And it has continued to evolve and change. And now you’ve got a United States senator at Senate hearings asking the people that run Twitter and Facebook why they are unfairly censoring this news organization or that person on a random basis, and they’re not getting honest answers.

“He doesn’t care. The only thing that matters to him is Breitbart is right wing and so they should be made to go out of business. A United States senator, folks. He is violating his constitutional oath by asking them to do this.”