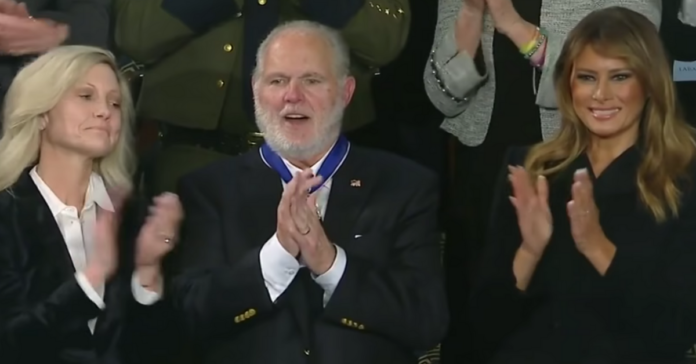 Rush Limbaugh had a stunning career – he changed the game in multiple industries, became a political kingmaker, and lived the American dream complete with a few comebacks that no one thought he could come back from.

Just amazing and the media will take 50 years to give him his due because they are flat-out jealous. His fans were wondering what would happen to his show – would it continue? have a new host? etc? and now they have some answers.

We now know that the company that syndicates his show will keep it going with Rush at the helm using archived material and some guest hosts.

Premiere Networks, which syndicates and hosts Limbaugh’s show, said they will keep the show going using clips from his past shows and they will keep playing them “until his audience is prepared to say goodbye.

“The Rush Limbaugh Show” will continue, using archived segments and clips, focusing on Rush’s voice and with a few guest hosts spots in its regular noon to 3 p.m. time slot Monday through Friday according to Premiere.

“No one can replace Rush Limbaugh,” said Hosea Belcher, a senior vice president for Iheartmedia Inc.’s Premiere Network. “Our plan is to provide the millions of loyal listeners with the voice of Rush Limbaugh for long term.”

Mark Steyn, Todd Herman and Ken Matthews, who helped fill in for Rush while he was treated for cancer are expected to guest hosts.

"Rush Limbaugh was one of the finest human beings you'd ever want to meet… It burns me to my soul when people sully his reputation with falsehoods." pic.twitter.com/GkVzwzoXow

A cool story about my first time doing radio with the legendary Rush Limbaugh… It was right after my somewhat infamous interview with the ladies of The View… LMK your thoughts. #Rush #RushLimbaugh #RushLimbaughRIP https://t.co/TNT7wOVbV2