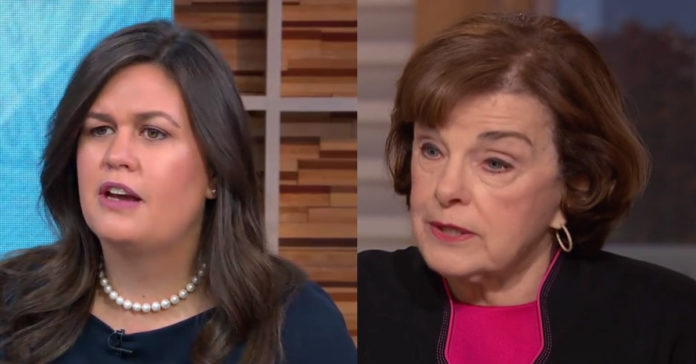 Sarah Huckabee Sanders is joining the public fight for Brett Kavanaugh and the soul of America.

Look, the hit job clearly orchestrated by Dianne Feinstein and the crooked Dems is an America tragedy.

What they are doing to ruin people’s lives and jump to judgment is simply un-American. We are a nation of laws and innocent before guilty and proof beyond a reasonable doubt as Sarah reminded the hapless Senator from California.

As reported by The Daily Wire

Sanders, appearing on “Good Morning America,” also decried the state of politics in the U.S. today.

“Brett Kavanaugh has asked for his voice to be heard in this process, too,” Sanders said. “Last I can remember, we’re still a country where you’re innocent until proven guilty — unless you’re a conservative Republican. It is absolutely shameful what the Democrats have done and the way they have turned this into complete political process.”

“They want this to be a political game, and I think that the way they have operated in this is absolutely appalling,” Sanders said. “If anything has been appalling, it’s the way that they have gone after and used these people’s stories and their lives and exploited them for political gain.”

Sanders was asked whether Deborah Ramirez, a classmate of Kavanaugh’s at Yale University who claims Kavanaugh exposed himself at a freshman-year party, should be allowed to testify.

“Certainly we would be open to that, and that process could take place on Thursday,” Sanders said.

Christine Blasey Ford, who claims Kavanaugh held her down and fondled her when the two were at a boozy high school party 36 years ago, is scheduled to testify before the Senate Judiciary Committee on Thursday. In an interview Monday night on Fox News, Kavanaugh denied both Ford’s and Ramirez’s allegations and said he would not “let false accusations drive us out of this process.”

“The president’s been clear,” Sanders said. “Let them speak, but let’s also let Brett Kavanaugh speak, and let’s let him tell his side of the story before we allow allegations to determine his entire future.”