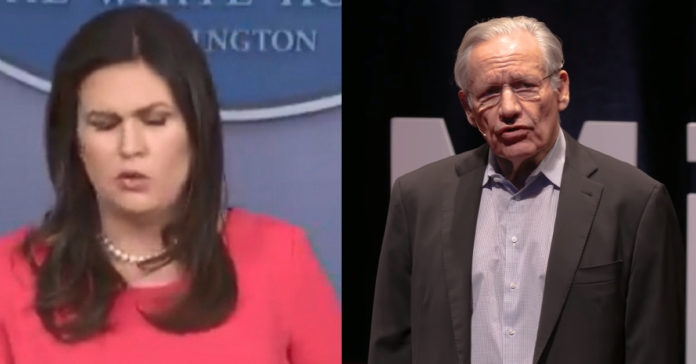 A new anti-Trump book is making the rounds and it is just another swampy hit job. It’s incredible really how often these clear hit pieces get printed by major publishers.

It is a disgrace as well. Today President Trump came forward and ripped the book, according to an exclusive interview with The Daily Caller:

President Donald Trump addressed newly released excerpts from Bob Woodward’s book on his administration, denying some specific allegations and accusing the author of credibility issues, in an exclusive Oval Office interview with The Daily Caller.

“It’s just another bad book. He’s had a lot of credibility problems,” Trump declared, adding, “I probably would have preferred to speak to him, but maybe not. I think it probably wouldn’t have made a difference in the book. He wanted to write the book a certain way.”

“It’s just nasty stuff. I never spoke to him. Maybe I wasn’t given messages that he called. I probably would have spoken to him if he’d called, if he’d gotten through. For some reason I didn’t get messages on it.”

Trump specifically denied that senior aides, such as former National Economic Council Director Gary Cohn, were removing papers from his desk, saying “that’s false,” that “it’s just made up” and that “there was nobody taking anything from me.”

The president speculated that the statements could have come from “disgruntled employees or just made up.”

“It could be just made up by the author,” he said.

The president pointed to a newly released statement from White House chief of staff John Kelly, who denied making disparaging remarks about his boss.

“The idea I ever called the President an idiot is not true,” Kelly said. “As I stated back in May and still firmly stand behind: ‘I spend more time with the President than anyone else, and we have an incredibly candid and strong relationship. He always knows where I stand, and he and I both know this story is total BS. I’m committed to the President, his agenda, and our country.  This is another pathetic attempt to smear people close to President Trump and distract from the administration’s many successes.”

But it was Sarah Huckabee Sanders who hit the biggest note and sent the hapless author scurrying:

“This book is nothing more than fabricated stories, many by former disgruntled employees, told to make the President look bad. While it is not always pretty, and rare that the press actually covers it, President Trump has broken through the bureaucratic process to deliver unprecedented successes for the American people.”

.@PressSec: "“This book is nothing more than fabricated stories, many by former disgruntled employees, told to make the President look bad. " pic.twitter.com/N9VX5gjM0j