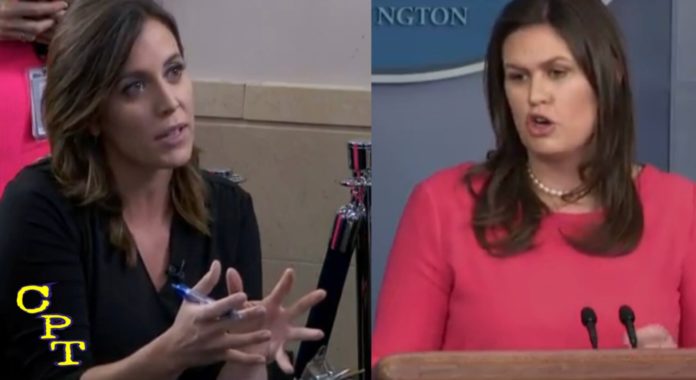 It was the first briefing she has held since the historic summit and even more historic Trump correction (Trump does not like to issue corrections).

The press was ready to pounce and the briefing quickly turned contentious.

Of course, the drama came from the liberal wing of the press corps. In particular from MSNBC reporter Hallie Jackson who basically called Trump a liar.

“Two questions Sarah.  I want to clarify something from the beginning of briefing about whether Russia is still targeting the US and despite the video that shows trump saying no to the question…”

Sarah shot back that Trump wasn’t even answering that question as he was getting shouted at by multiple reporters…she then clarified that Trump was saying no he wasn’t taking any more questions.

Jackson butted back in,

“But this is the second time in two days that the President or the White House has come out and reversed what the president just said.”

“Actually I am interpreting not reversing what the president just said,” Sarah responded.

The Jackson went there and called Trump a liar,

“Why should this president have any credibility to Americans in what he says if in fact 23 hours later or in this case three hours later, he reverses himself and says just kidding…”

“First of all that is not what I said. I was interpreting what the president’s intentions were and stating his administration’s policy…”

“It’s not exactly how you just explained, we did not say just kidding…”

“And you can take the fact that the president has credibility because he saw that he had misspoken and wanted to clarify, and he did.”

Why is this so hard for the media to understand?

Jackson kept it up asking,

“When did trump publicly call out Putin?”

“When he said that Russia interfered with our election that is a pretty bold call out of another world leader.”

.@PressSec: "[President Trump] saw that he had misspoken. He wanted to clarify that yesterday, which he did … I think by stating the fact that the President said that Russia interfered with our election is a pretty bold call out of another world leader." pic.twitter.com/UDYqP5UBmo