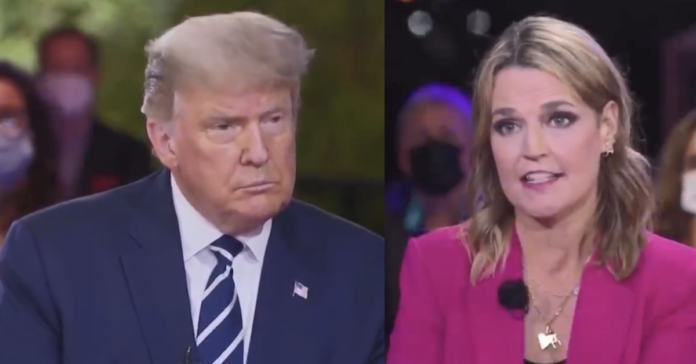 Savannah Guthrie was ripped for her performance hosting a town hall with President Trump last night and accused of exhibiting the typical media bias against Trump.

Guthrie, whose husband was former Vice President Al Gore’s traveling chief of staff during the 2000 presidential election cycle, and is a longtime Dem operative/lobbyist took over what was meant to be a town hall with questions from voters and turned it into a one on one debate with Trump.

The statement added that Trump “masterfully handled Guthrie’s attacks and interacted warmly and effectively with the voters in the room.”

“Over on ABC, it was a completely different scene, as once again Biden was kept comfortable and away from any questions that might challenge him.”

“I’m glad Trump agreed to another debate. Didn’t realize it would be with Savannah Guthrie.”

Fox News contributor Katie Pavlich: “Is this a town hall or a debate between President Trump and Savannah Guthrie?”

“Also, why does she keep saying, ‘You’ll like this question?’ and ‘I don’t understand.’ It’s bizarre,” she added.

Kayleigh McEnany said, “A third of the way into the NBC town hall and NO questions from the PEOPLE!!!”

A third of the way into the NBC town hall and NO questions from the PEOPLE!!!