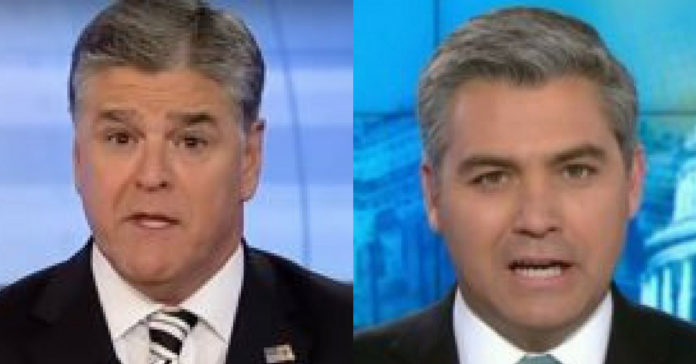 Sean Hannity does not suffer liberal fools lightly nor should he. These are difficult times to be a conservative, despite holding all power in Washington D.C.

So Sean did what he does best and CNN should be ashamed.

“It’s like a 24-hour, seven-day-a-week obsession. Every second, every minute, every hour, every day … all they’re looking for is something to be outraged about as it relates to the president,” Hannity told Boyle and co-host Kaya Jones.

Speaking to CNN’s assertion reporter Jim Acosta’s “life was in jeopardy” at a Trump rally because a crowd shouted insults including “CNN sucks” at him, Hannity was very skeptical. “Let me be very clear about this, if I’m ever at any event, and I’m a prominent conservative — and I think both of you would agree with me — if anybody in the crowd ever dared to lay a hand on anybody from the media, we would be the first people to step in and stop it,” he said. “At least I would jump right in, get right in the middle of it, and stop it.”

“There’s a reason that people are shouting ‘CNN sucks.’ It’s because they do suck,” Hannity quipped. “This is just a means of — I think — of intimidating and trying to silence people for telling them — really shouting at them — that their coverage is abusively biased.”

Hannity was dismissive of the notion Jim Acosta and other leftist journalists are somehow uniquely endangered by President Trump’s anti-leftist media rhetoric. “With all due respect to everybody, I’ve had a lot of death threats over the years. I’ve had white powder sent to my office,” he said. “There’s always gonna be a crazy in every crowd. The shooting that took place at that baseball game practice, where Steve Scalise was shot, he was a Bernie supporter, but I don’t blame Bernie Sanders for the fact that one of his supporters is a nut.”

“It’s a simple formula,” Hannity said of the Democratic election strategy for November, when they hope to flip the House and bring about that change. “Outside of that, they don’t have anything in their arsenal, except the same old playbook that Republicans are racist, and sexist, and misogynistic, homophobic, xenophobic, Islamophobic, want dirty air and water, and to kill grandma and kids.