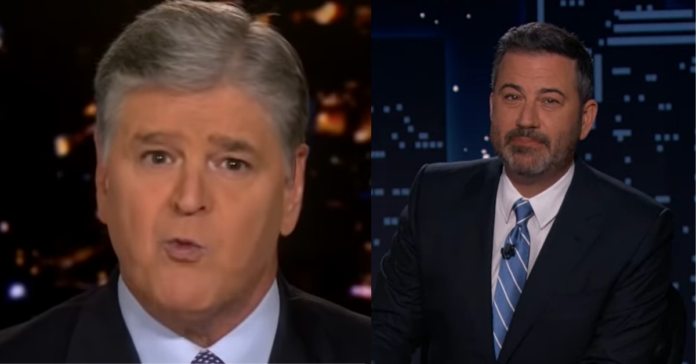 Hannity said: “Far-left, low-rated late-night host Jimmy Kimmel is spewing more hatred and more rage, saying, ‘Is it transphobic to call a trans person an ignorant a**hole?’ in response to our interview with Caitlyn Jenner, talking about the real problem of homelessness.”

“Jimmy, what is with all the anger and all the cheap shots? Yeah, if you haven’t noticed, homeless people all over your state. Don’t you have anything better to do?” Sean said. “Maybe actually trying to be funny or boost your dismal ratings because we’re absolutely crushing you by like 70% in total viewers,” he continued.

“Jimmy, here’s my advice, don’t talk about my show anymore,” Hannity said before showing some of Kimmel’s career lowlights.

“Let’s remind people, take a trip down memory lane,” Hannity said. “You wanna talk about ignorant a**holes? This is you dressed as Karl Malone.”

“And check this out. This is you, an ignorant a**hole, when you had a cucumber in your pants during The Man Show. Maybe your bosses at Disney can talk you out of your bad behavior,” Sean said.

“You talk about my show, I’ll hit you back 50 times harder,” Hannity warned.

He said to Fox News colleague Laura Ingraham as his show came to an end:

“We had a little spat back in the day. And if he wants me to remind his bosses at Disney of all the crap that he’s done over the years that, frankly, are pretty ignorant, to use his words, I’ll be glad to pick that fight.”

“I’d advise him not to talk about me anymore. That’s my advice,” Hannity said before adding, “late night as we once knew it is dead.”

Kimmel said earlier, “This is how well Caitlyn Jenner understands the plight of everyday Californians here in LA. Ah, homeless people: can’t walk around them, can’t fly over them.

“It’s a tough one. I don’t know, I guess we’ll let the Internet decide tomorrow.”

Jimmy Kimmel called Caitlyn Jenner an “ignorant a-hole” when she made comments about the homeless in California during an interview with 'Fox New’s Sean Hannity. #THRNews pic.twitter.com/s8R87Pt7q5