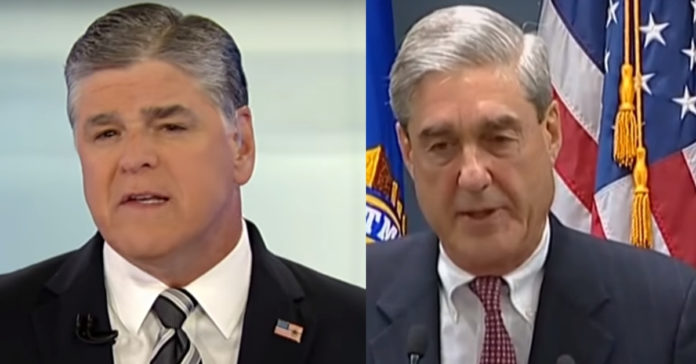 Sean Hannity just dropped a bombshell on his radio show – Trump will fire Mueller after the hurricane.

Keep in mind the extraordinary lengths Trump has gone to help Mueller with his investigation.

He has literally turned over everything – more documents than he should have but he knows he has nothing to hide.

Trump did this for a simple reason – he wanted it to be finished as soon as possible and he respected that Mueller had to do it.

So he cooperated 100%.  Not the actions of a guilty man to be sure.

Mueller has everything he could possibly want. If all Bob has after this colonoscopy is some minor lying to the FBI from low-level aides and tax charges against crooked lobbyists, Trump has every right to be annoyed. And has every right to make his move and put an end to this once and for all.

And according to Sean Hannity, Muller will be gone soon.

As reported by Newsweek:

Fox News and talk radio show host Sean Hannity is a known ally and supporter of President Donald Trump, often using his various media platforms to offer praise or even policy advice for the president.

When talking to a listener who called into his radio show Tuesday afternoon, Hannity said he expects the president to fire special counsel Robert Mueller and end the investigation into Russian election interference “sooner rather than later,” potentially after Hurricane Florence passes.

Given Hannity and Trump reportedly talk so regularly that some White House staffers, according to The Washington Post, have dubbed the conservative media personality the president’s unofficial chief of staff, it remains to be seen whether Hannity is offering the president his personal advice or if he’s simply expressing wishful thinking.