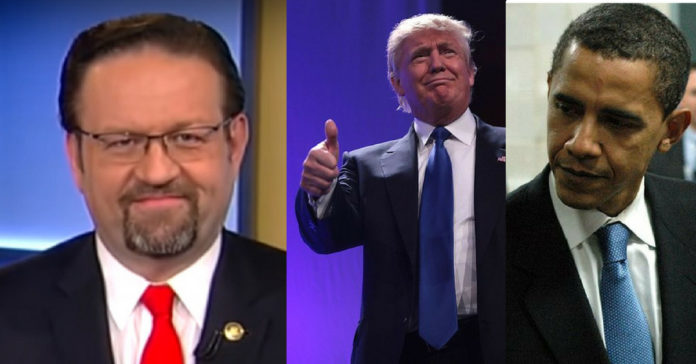 Sebastian Gorka is no fool and handles the relentless attacks from the left with an elegance and class not seen in our politics in quite a while.

Like Kissinger, his advice is sought after by world leaders for its honesty, rather than its obsequiousness, a rarity in the crooked halls of Washington D.C.

So when Dr. Gorka tweeted an article with a simple solution to two problems – funding the border wall and stopping the scamming of welfare by illegal immigrants – it would be wise to listen as he has Trump’s ear.

Mexico won’t have to pay for the wall, after all. US taxpayers won’t have to pick up the tab, either. The controversial barrier, rather, will cover its own cost just by closing the border to illegal immigrants who tend to go on the federal dole.

That’s the finding of recent immigration studies showing the $18 billion wall President Trump plans to build along the southern border will pay for itself by curbing the importation of not only crime and drugs, but poverty.

“The wall could pay for itself even if it only modestly reduced illegal crossings and drug smuggling,” Steven A. Camarota, director of research at the Center for Immigration Studies, told The Post.

Federal data shows that a wall would work. A two-story corrugated metal fence in El Paso, Texas, first erected under the Bush administration has already curtailed illegal border crossings there by more than 89 percent over the five-year period during which it was built.

Absent a wall, the Homeland Security Department forecasts an additional 1.7 million illegal crossings at the US-Mexico border over the next decade.

If a wall stopped just 200,000 of those future crossings, Camarota says, it would pay for itself in fiscal savings from welfare, public education, refundable tax credits and other benefits currently given to low-income, illegal immigrants from Mexico and Central America.

If a wall stopped 50 percent of those expected crossings, he says, it would save American taxpayers a whopping $64 billion — almost four times the wall’s cost — to say nothing of the additional billions in federal savings from reduced federal drug interdiction and border-security enforcement.

Camarota explains that illegal border-crossers from Mexico and Central America — who account for more than 75 percent of the illegal immigrant population in the US — are overwhelmingly poor, uneducated and lack English language and other skills. In fact, the average Latino illegal immigrant has less than a 10th-grade education. That means if they work, they tend to make low wages; and as a result pay relatively little in taxes while using public services. And if they have children while in the US, they more often than not receive welfare benefits on behalf of those US-born children, who have the same welfare eligibility as any other citizen.

“A large share of the welfare used by immigrant households is received on behalf of their US-born children,” Camarota said. “This is especially true of households headed by illegal immigrants.”

Therefore, illegal border-crossers create an average fiscal burden of more than $72,000 during their lifetimes, Camarota says. Including costs for their US-born children, the fiscal drain jumps to more than $94,000.

While the national media routinely report that illegal immigrants don’t go on welfare, Camarota says this is a pervasive myth. While in most cases they can’t legally qualify for welfare, food stamps, Medicaid or other public benefits, the reality is that the vast majority of households headed by illegal immigrants are on welfare through their children.

The vast majority of households headed by illegal immigrants are on welfare through their children.

The US Census Bureau’s latest “survey of income and program participation” shows that 62 percent of illegal-immigrant-headed households are on the federal dole — more than double the rate for households headed by native-born Americans. And that includes households where one or more workers are present in the household.

Kill two birds with one wall…worth a shot don’t you think?