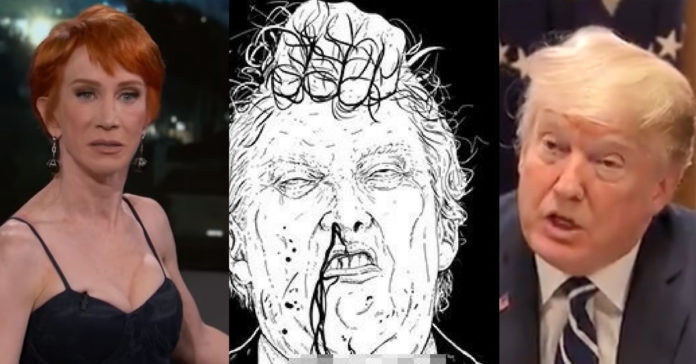 kathy Griffin made a huge mistake and she paid dearly. She redefined the word career ender with her vicious headless Trump stunt.

She lost jobs and did serious damage to her career. After that debacle, one would think the left would have learned their lesson.

But no, they have not. For a people so used to living without the consequences of their actions, they learn the hard way.

When the secret service knocks on their door. Which is about to happen to the owners of this Portland art gallery.

A gory illustration of someone slitting the throat of President Trump currently decorates the window of an art gallery in Portland, OR, with the caption “FUCK TRUMP.”

This picture taken on the street outside the One Grand Gallery has been making the rounds on Twitter.

Breitbart News was able to verify this is real via the gallery’s Facebook page (archived here). Also, photos of the gallery on its website reveal the windows facing the street are the same.

This means that anyone driving or walking by, including small children, will be exposed, not only to a grisly photo depicting the assassination of a sitting president, but the “FUCK TRUMP” caption.

The event surrounding this particular gallery showing opened on July 13 and is called “Fuck you Mr. President.”

In the era of Trump, this kind of wishful thinking surrounding the grisly assassination of the president is nothing new, unfortunately. As Breitbart News has documented, the same establishment media that spent a week hounding a rodeo clown for wearing an Obama mask has devolved into open apologists — if not advocates — for violence against Trump and his supporters.

The controversial art currently on display in their window has prompted many outraged supporters of the President to call for people to report the gallery to the Secret Service. People have also flooded their Facebook page to leave poor reviews and scold them for their petulance. The gallery currently has a 1.4 star rating on the site.

“I saw a painting in your store front window of our president getting his throat slashed. Is Kathy Griffin peddling her “art” here now?? Talk about a great way to ruin my lunch,” a woman named Laura C. commented on the gallery’s Yelp page. “Good luck with selling your hate speech art. I’m pretty sure the kind of people who appreciate it, can’t afford it. Gross!”

Other art on display inside the gallery includes a painting of the president with a Hitler mustache and missiles with penises on them.