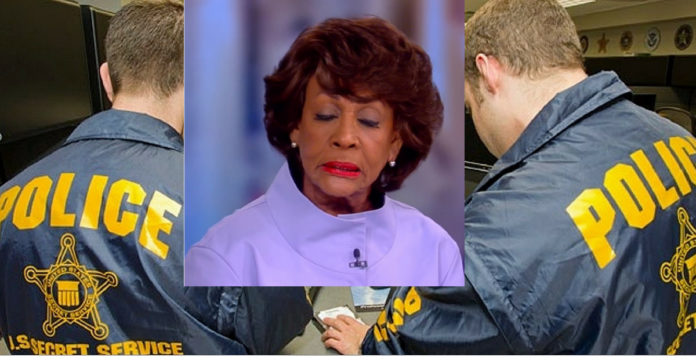 This was bound to happen and if Maxine doesn’t learn quickly this could get ugly, fast.

The calls for her to be removed from the office she is constantly disgracing – even Nancy Pelosi came out against what she did – are getting louder and louder.

While Maxine is fighting for her job she just got the worst kind of bad news from The US Secret Service.

From The American Mirror:

The Secret Service is reportedly “looking into” weekend comments by California Congresswoman Maxine Waters where she called for opponents of the Trump administration to confront his aides in public.

After reporting she filed a complaint with the Secret Service over Waters’ comments, citizen journalist Laura Loomer tweeted, “Although the Secret Service Officer couldn’t get into details of the investigation, he did tell me that the SS is looking into Maxine’s comments that incite violence against @realDonaldTrump & his staff.”

On Saturday,Waters gave specific ideas of how protesters can confront Trump administration officials.

“History will record while he tried to step on all of us, we kicked him in his rear and step on him,” she yelled, whipping up the crowd.

“If you think we’re rallying now, you ain’t seen nothin’ yet,” she warned.

“And guess what,” she predicted, “we’re going to win this battle because while you try and quote the Bible, Jeff Sessions and others, you really don’t know the Bible.

“And so, let’s stay the course. Let’s make sure we show up wherever we have to show up and if you see anybody from that Cabinet in a restaurant, in a department store, at a gasoline station, you get out and you create a crowd and you push back on them, and you tell them they’re not welcome anymore, anywhere,” she yelled.

I just filed a complaint against Rep. @MaxineWaters with the @SecretService. Although the Secret Service Officer couldn’t get into the details of the investigation, he did tell me that SS is looking into Maxine’s comments that incite violence against @realDonaldTrump & his staff.