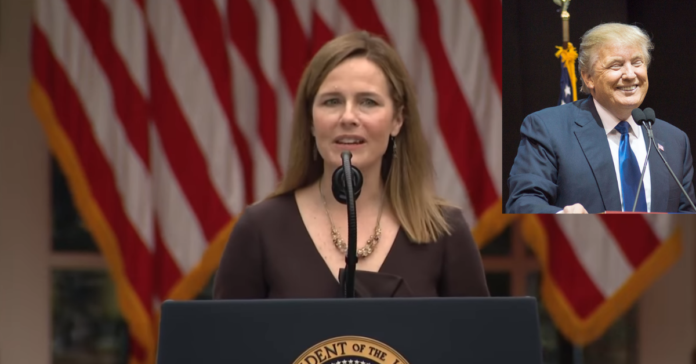 The Senate has officially confirmed Judge Amy Coney Barrett to the Supreme Court handing a huge win to the GOP and conservatives across the country.

The 52-48 Senate vote on Barrett’s nomination capped a doomed fight from the Democrats who had no power to stop the confirmation.

They have complained and they are still rattling their sabers over the power move by the GOP.

But elections have consequences and Hillary shouldn’t have been such an arrogant candidate.

GOP Sen. Susan Collins (R-Maine) was the only Republican to oppose Barrett and that will probably end her campaign for the Senate but she made her bed.

Sen. Lisa Murkowski (R-Alaska), who previously voted against advancing Barrett because of the election, supported her nomination on Monday. Sen. Kamala Harris (D-Calif.) returned from the campaign trail to oppose her nomination.

Barrett’s nomination marks a new record for how close to the presidential election that the Senate has confirmed a Supreme Court nominee. She’ll also be the first justice in modern history to be confirmed without bipartisan support, underscoring Democratic frustration with both the GOP push to confirm her and misgivings about her judicial philosophy.

Despite the high stakes of her nomination fight, there was little doubt that Republicans would fill the seat. Majority Leader Mitch McConnell (R-Ky.) vowed within hours of Ginsburg’s death to give whomever Trump nominated a vote, and GOP senators quickly coalesced behind the strategy.

McConnell, speaking to Republicans on the Senate floor, touted Barrett’s nomination as a long-lasting legacy of the last four years.

“We made an important contribution to the future of this country. A lot of what we’ve done over the last four years will be undone sooner or later. They won’t be able to do much about this for a long time to come,” he said.

In many ways, Barrett’s confirmation caps off a generations-long goal for Republicans of a top-down overhaul of the federal judiciary.

Barrett will lock in a 6-3 conservative majority on the Supreme Court, but beyond that Trump has appointed a total of 220 judges including 53 to the influential circuit courts and 162 district court judges. That puts him behind only then-President Jimmy Carter for the most judges confirmed at this point in his White House tenure.