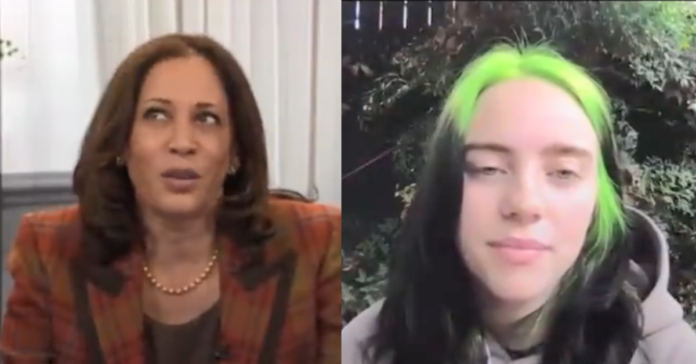 The Democrats are worried about turnout as they should be. In some locations, early voting is off the charts.

So Harris is trying to get out the vote and interviewed Hollywood singer Billie Eilish.

The video below shows Harris asking Eilish to explain to voters how important voting, especially this year, is.

Eilish says that “your voice matters.” Harris responds, “I totally agree with you.”

Harris then asks how Eilish feels about the “climate crisis.” Eilish says, “You know, we’re just running out of time at this point and, even if we did something drastic now, it’s still cutting it really close.”

“And that on its own is a terrifying thought, but it’s like, you just can’t deny science.”

“The earth is precious to us.

“It’s the only reason we’re here as we all know. And if we don’t protect it, and take care of it, and love it, and nurture it then it’s just – it’s not, we’re going to die, first of all, and – it’s a lot to unpack, but it is really important,” Eilish said.

Harris chimed in, “That is a great point that you’re making.

“Like the clock is ticking on this thing and we need to have timelines, you know, Joe and I talk about the timelines that we have for carbon neutral, for net zero, in terms of emissions, in terms of greenhouse gas emissions, you know, and investment in what we think about infrastructure to capture and store water, in California and so many other places, this is a big issue.”

Harris added in her tweet promoting the clip, “Thank you, Billie Eilish, for joining me in talking about everything that’s at stake in this election.”

“Your generation deserves leaders who actually care about the future of our country and our planet.”

Thank you, @billieeilish, for joining me in talking about everything that’s at stake in this election. Your generation deserves leaders who actually care about the future of our country and our planet. pic.twitter.com/Oyq9CxZKpU