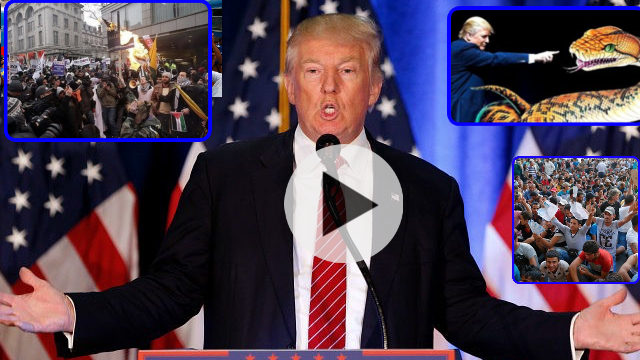 According to Donald Trump, Hillary Clinton wants to let 500 percent more Syrians refugees into the U.S., raising the current Obama limit of 10,000 to over 65,000. With all the Radical Islamic Terrorists (words Clinton and Obama will NOT even say) out to kill innocent United States citizens, Donald Trump has recommended that we temporarily halt immigration from certain Muslim countries, and put a formal vetting process in place, to protect US Citizens. (SEE VIDEO BELOW)

This poem, The Snake, is a metaphoric on the issues faced by the United States, and countries all over the world face, by allowing unvetted immigration in masses into their borders. The video has gone VIRAL worldwide. Please watch and SHARE everywhere…..

THE SNAKE by Oscar Brown Jr.

“On her way to work one morning
Down the path alongside the lake,
A tender hearted woman saw a poor half frozen snake.
His pretty colored skin had been all frosted with the dew.
“Oh well,” she cried, “I’ll take you in, and I’ll take care of you.”
“Take me in oh tender woman
Take me in, for heaven’s sake.
Take me in oh tender woman,” sighed the snake.
Now she clutched him to her bosom, “You’re so beautiful,” she cried.
“But if I hadn’t brought you in by now you might have died.”
Now, she stroked his pretty skin, and then she kissed and held him tight.
But, instead of saying thanks, that snake gave her a vicious bite.”

“I saved you,” cried that woman.
“And you’ve bit me even, why?”
“You know your bite is poisonous and now I’m going to die”
“Oh shut up, silly woman,” said the reptile with a grin.
“You knew damn well I was a snake before you took me in!”