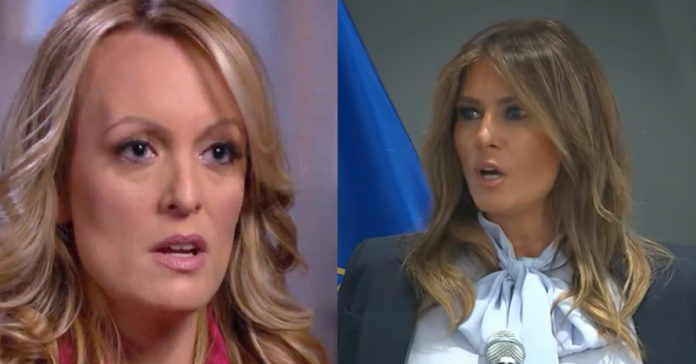 This is stunning and really goes to show you how much Melania Trump is respected around the world.

Melania Trump is a private person and it drives the media nuts. The media, of course, want to twist and turn whatever she says in some way to help push whatever their narrative is for that day.

But Melania is too smart and too classy to fall for it and then the media bashes her for her silence.

Well, today she found the most unlikeliest of allies. As reported by The Hill:

“People should stop speaking for her,” Daniels in a Sunday interview with the Sunday Mirror. “Maybe she’s happy. Everything we say about her is a projection. Some people misplace sorrow and pity on another person.”

Daniels claims she had an affair with President Trump in 2006, months after Melania Trump gave birth to their son Barron.

Melania Trump was reportedly “blindsided” by the reports of the payment and kept out of the public eye for several days.

She also declined to attend a trip in January with Trump to the World Economic Forum in Davos, Switzerland.

“The entire world would be interested to know what she feels,” Daniels said. “But if we never know, that is her right and I support it.”

Since news broke in January about the affair and subsequent hush-money payment Daniels received to keep quiet about the alleged relationship, rumors have circulated regarding the current status of the Trumps’ relationship.