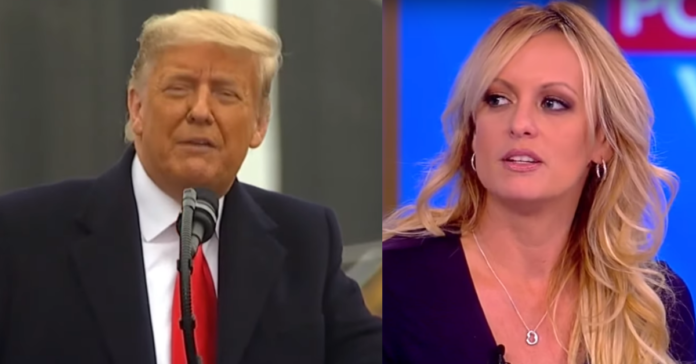 Former President Donald Trump just got a huge win and Stormy daniels and the disgraced Michael Avenatti a massive loss. Daniels, with Avenatti’s guidance, sued Trump for defamation for saying, “A sketch years later about a nonexistent man. A total con job, playing the Fake News Media for Fools (but they know it)!” on Twitter.

Daniels lost the case and when the judge ordered her to pay Trump’s legal fees she was shocked. Apparently, Avenatti forgot to tell her she was on the hook for the dumb lawsuit if he lost. Avenatti, besides giving her terrible legal advice, was also stealing from Daniels.

The judge said when ordering Stormy to pay Trump almost $300K for his legal bills: “The Court agrees with Mr. Trump’s argument because the tweet in question constitutes ‘rhetorical hyperbole’ normally associated with politics and public discourse in the United States. The First Amendment protects this type of rhetorical statement.”

The Supreme Court on Monday turned away a defamation dispute between Stormy Daniels, a former adult film actress, and former President Donald Trump, who Daniels’ claims to have had an affair with years before he was president.

In declining to revive the lawsuit filed by Daniels, the Supreme Court leaves untouched a ruling from the 9th U.S. Circuit Court of Appeals in favor of the former president. Mr. Trump accused Daniels of lying about their alleged relationship and her claims that she was threatened by an unidentified man after agreeing to reveal the details of their tryst.

The legal battle between Mr. Trump and Daniels arose after Daniels, whose given name is Stephanie Clifford, said she would speak with In Touch Weekly magazine about her purported affair with the former president in 2011. After agreeing to reveal the relationship, which she said occurred in 2006 after he married his third wife Melania Trump, Daniels said a stranger threatened her and her child in a parking lot, warning “Leave Trump alone. Forget the story.“

Judge James Otero, who threw out Daniels’ suit against the president in October, instructed her to pay Mr. Trump $293,052.33 in attorney fees. “Based on the unique nature of this litigation and the Court’s familiarity with the fees charged in this jurisdiction, the Court concludes that Defendant’s rate requests are reasonable,” Otero wrote.

Daniels, whose legal name is Stephanie Clifford, alleges she had an affair with Mr. Trump in 2006. With the help of her high-profile and outspoken attorney Michael Avenatti, Daniels sued the president in April after Mr. Trump said on Twitter that a composite sketch of a man she said threatened her in 2011 to keep quiet about an alleged affair with the commander-in-chief was a “con job.”

When he dismissed the suit, Otero said Mr. Trump’s tweet was a “hyperbolic statement” against a political foe.