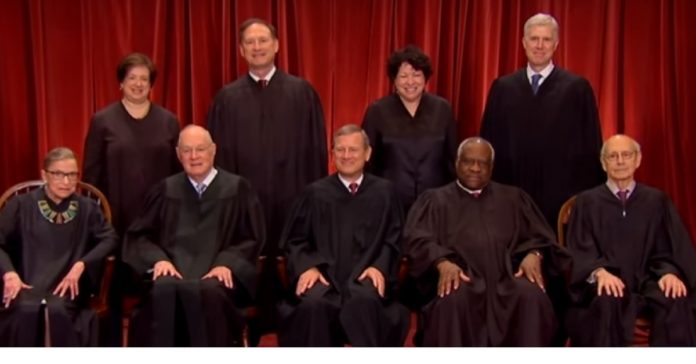 The Supreme Court just handed the Democrats another devasting loss. This one is important for it relates to voting and specifically, how to clean up the voter rolls and eliminate election fraud.

Clean elections and no more voter fraud of the kind endemic in major cities spells doom for the Democrats who rely on running up the score in populated urban strongholds.

The Supreme Court on Monday upheld Ohio’s “use it or lose it” practice of cleaning up its voter rolls.

In a 5-4 decision, the court’s majority said the practice, known as the “supplemental process,” does not violate the National Voter Registration Act, which bar states from removing the names of people from the voter rolls for failing to vote.

The court’s five conservative justices voted in the majority, with the court’s four liberals dissenting.

Under the supplemental process, voters who have not voted in two years are flagged and sent a confirmation notice. Voters who then fail to respond to the notice and vote within the next two years are removed from the rolls.

The process is one of two methods state officials use to identify voters who are no longer eligible to vote due to a change of residence.

Critics argued that the “use it or lose it policy,” violated the Failure-to-Vote Clause of the NVRA by using a person’s failure to vote twice over: once as the trigger for sending a notice that must be returned and again as one of the two requirements for removal.

In delivering the opinion of the court, Justice Samuel Alito said the law does not violate that clause or any other provision of the NRVA.

“The notice in question here warns recipients that unless they take the simple and easy step of mailing back the pre-addressed, postage prepaid card — or take the equally easy step of updating their information online — their names may be removed from the voting rolls if they do not vote during the next four years,” he wrote. “It was Congress’s judgment that a reasonable person with an interest in voting is not likely to ignore notice of this sort.”