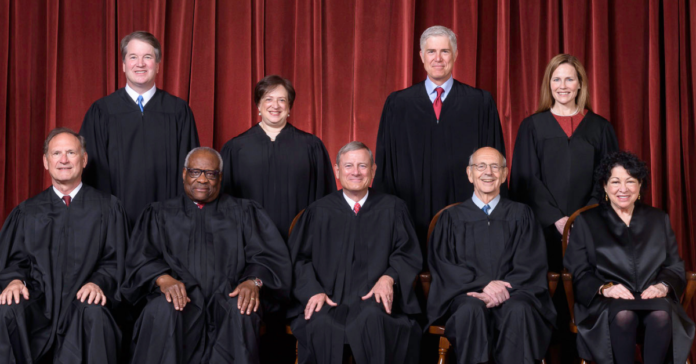 The U.S. Supreme Court just handed Texas and other GOP states a big loss and upheld the Affordable Care Act for the third time today despite a blistering dissent by Justice Samuel Alito. The vote was 7 to 2 with Gorsuch joining Alito. The opinion was authored by Justice Stephen Breyer who was joined by Chief Justice John Roberts and Justices Clarence Thomas, Sonia Sotomayor, Elena Kagan, Brett Kavanaugh and Amy Coney Barrett.

The decision tossed the challenge to the law because Texas and other objecting GOP-dominated states were not required to pay anything under the mandate provision (Trump and the GOP Congress dropped it to $0) and so had no standing to bring the challenge to court.

The reporting requirements, in turn, implement the mandate—indeed, they explicitly cross-reference by requiring employers to provide information about such coverage. And

the adult-children coverage requirement works as part of a cohesive set of insurance reforms central to the ACA’s overall structure, which turns on healthy persons’ entry into the market via the individual mandate.

The answer largely flows from everything I have already said above. Relief in a case runs against parties, not against statutes. And provisions that are inseverable from unconstitutional features of a statute cannot be enforced. Supra, at 15–20. No matter how one approaches the question, then, the answer is clear:

That answer comports with the reasoning of the NFIB joint dissent, which made clear that the state plaintiffs should not be required to comply with the provisions of the ACA that burden them.

Thus, under either the framework used in the NFIB joint dissent or the alternative framework advocated in subsequent cases, the state plaintiffs are entitled to relief freeing them from compliance with the ACA provisions that burden them.

No one can fail to be impressed by the lengths to which this Court has been willing to go to defend the ACA against all threats. A penalty is a tax. The United States is a State.

And 18 States who bear costly burdens under the ACA cannot even get a foot in the door to raise a constitutional challenge.

So a tax that does not tax is allowed to stand and support one of the biggest Government programs in our Nation’s history. Fans of judicial inventiveness will applaud once again.  But I must respectfully dissent.

BREAKING: The Supreme Court throws out the challenge to Obamacare, holding the plaintiffs all lack standing: https://t.co/UZjWJGoPc6

Breyer writes for the court, holding that the states and the individual plaintiffs lack standing. Only Alito and Gorsuch dissent. https://t.co/UZjWJGoPc6 pic.twitter.com/wfBowLN4N3

Alito, joined by Gorsuch, would hold that (1) the individual mandate is now unconstitutional, and (2) large portions of the ACA must essentially fall with it, becoming "unenforceable" against the state plaintiffs here. https://t.co/UZjWJGoPc6 pic.twitter.com/GOwSkf6juk