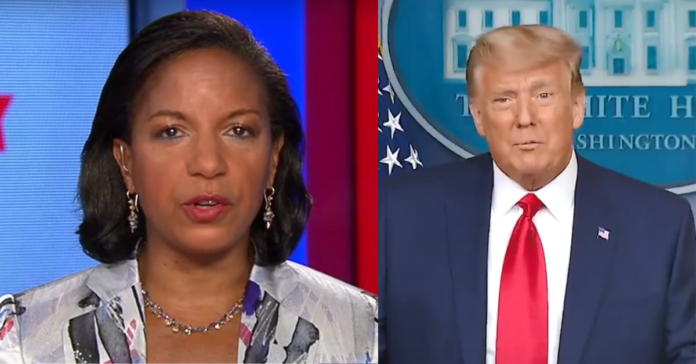 Susan Rice urged the people of Georgia to elect two Dem Senators in the runoff before ripping President Trump and saying a Dem Senate can save us from our democracy’s near-death experience.

She wrote in the New York Times: “It appears that our democracy dodged a bullet — or, more precisely, multiple concerted efforts by the president of the United States to torpedo its very foundations.

“While President Trump rages relentlessly about election “fraud,” many Republican leaders continue to parrot false denials of the validity of President-elect Joe Biden’s clear victory. Yet, so far, our democracy has withstood the greatest stress test of our lifetimes.

“Mr. Trump and his political allies have been employing nearly every weapon at their disposal to try to retain the White House, notwithstanding the will of the people.

“For now, our democracy has held.

“Still, the lesson we must learn is not a reassuring one: A determined autocrat in the White House poses a grave threat to our democratic institutions and can severely undermine faith in our elections, particularly when backed by partisans in Congress.

“Perhaps only when the stars are optimally aligned — when voters turn out in huge numbers, when the outcome is not close, when state and local officials and the courts adhere to the rule of law, when foreign interference is thwarted, when the media behaves responsibly and when people remain peaceful — can our democracy endure its greatest tests.

“Mr. Trump will leave office on Jan. 20, whether he acknowledges defeat or not. Yet, if his Republican enablers in Congress retain a Senate majority, they will not hesitate to reprise the politics of power at any cost, even by again subverting the democratic process.

“So, bolstering our democracy depends in large part on the people of Georgia voting out their incumbent senators on Jan. 5. If the Senate flips to Democratic control, Congress will be able to apply the lessons of our democracy’s near-death experience.

“It would enact the For the People Act to combat corruption, strengthen ethics rules and improve voter access as well as the John Lewis Voting Rights Advancement Act to restore the protections of the 1965 legislation.

“Congress would pass the Protecting Our Democracy Act to constrain the power of future presidents who deem themselves above the law and finally adopt long-stalled legislation to shore up our election infrastructure against adversaries, foreign or domestic.

“Now is no time for self-congratulation or complacency. We must act with the unique urgency and courage of those who know they are living on borrowed time,” she wrote.