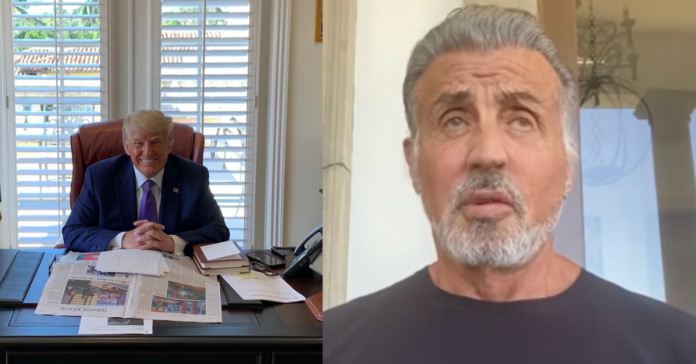 Sylvester Stallone is not going to give in to cancel culture, and according to a new report he is putting his money where his mouth is and officially joined Donald Trump’s private club Mar-a-Lago.

Stallone, 74, has owned homes in South Florida for years. He just recently dropped around $30 million for a mansion close to the club. Sly has been a longtime friend of the former president’s often visiting Mar-a-Lago as a guest over the years.

He has received some backlash for his friendship with Trump but according to Page Six that did not stop Stallone from joining Trump’s exclusive club.

A source who saw Stallone at the club last month told us, “Sly just became a member of Mar-a-Lago.” He was seen posing with some fellow guests for pics, all holding up their fists in a boxing pose.

The “Rocky” legend in December bought a $35 million compound near the club in Palm Beach, Fla., local reports said.

According to a listing, Sly’s new estate has seven bedrooms amid 13,241 square feet of living space, plus 253 feet of waterfront, a dock, a sandy beach, and a pool pavilion with an open-air cabana.

The “Rambo” star also once owned a Florida home on Miami’s Biscayne Bay, but last year was reportedly house-hunting in Palm Beach.

The ultimate story of hope is here just in time for Easter… I look forward to watching my friends , Mark Burnett and Roma Downeys new film RESURRECTION Now streaming on @discoveryplus https://t.co/eXYVW0g9X4

Very proud to be playing golf with the The man who is overwhelmingly considered by all experts THE GREATEST DEFENSIVE FOOTBALL PLAYER OF ALL TIME ! Lawrence Taylor! Keep Punching ,Sly https://t.co/2Ljlmlp1Yz

Spent a great day at John Staluppi’s. CARS OF DREAMS MUSEUM In North Palm Beach Florida. Amazing please, you should check it out online. The greatest. #chuckzito https://t.co/DcK5ZdpbJt