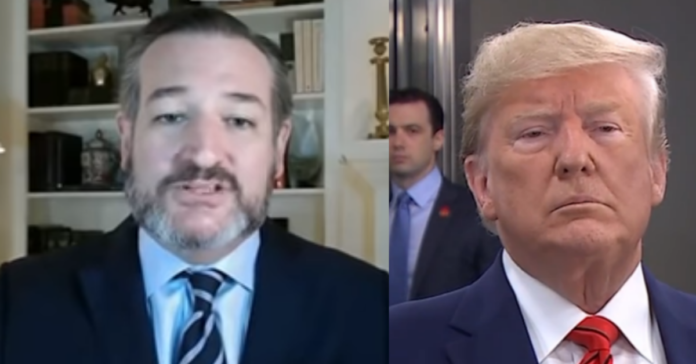 Ted Cruz put Joe Biden and the Dems on notice at CPAC saying the left wants Trump to go away but that will not happen. “They look at Donald J. Trump and they look at the millions and millions of people inspired who went to battle fighting alongside President Trump and they’re terrified,” Cruz said.

He continued, “They want him to go away. Let me tell you this right now, Donald J. Trump ain’t goin’ anywhere.”

“The Republican Party is not the party of the country clubs, it’s the party of steel workers and construction workers and taxi drivers and cops and firefighters and waitresses,” he added. “That is our party, these deplorables are here to stay!”

Ted Cruz also took some time to respond to a new report that former Speaker of the HOuse John Boehner had some choice words for him.

John Boehner has been going off script while recording the audio version of his new memoir, using expletives and asides not in the book — such as the former Republican House speaker saying, “Oh, and Ted Cruz, go f**k yourself.”

Why it matters: The book is appropriately titled, “On the House: A Washington Memoir.” It promises to share “colorful tales from the halls of power, the smoke-filled rooms around the halls of power and his fabled tour bus.” Two sources familiar with the tapings told Axios about the asides.

The audio version, which includes an even heftier price tag of $39.99, will be sprinkled with Boehner’s unfiltered, baritone, inner monologue.

Similar to the cover — where he’s pictured in a dark room, drinking red wine with a cigarette burning in an ashtray — Boehner has been taping his audiobook with a glass of wine in hand.

The Ohioan never hid his penchant for tan skin and red wine, or his love of cigarettes (two packs a day).

“John Boehner suggested I do something anatomically impossible, to which my response was: Who’s John Boehner?”

Sen. Ted Cruz (R-TX) says "a whole lot of voices in Washington" are "terrified" of Trump:

"John Boehner suggested I do something anatomically impossible, to which my response was: Who's John Boehner?"