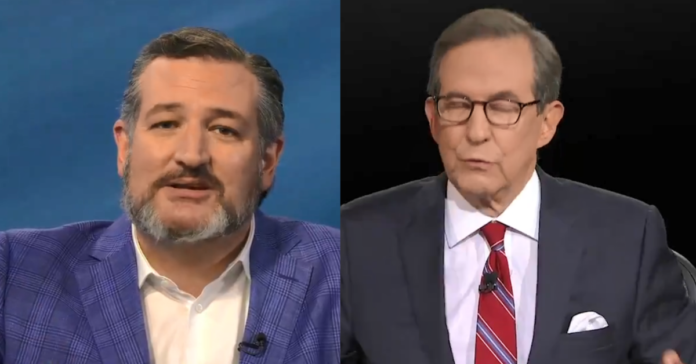 Ted Cruz dropped the hammer on Fox News’ Chris Wallace for his debate performance last night saying he did an abysmal job.

During an interview Hugh Hewitt’s nationally syndicated radio show, Sen. Ted Cruz (R-TX) went after Wallace, the supposed moderator for the presidential debate between Donald Trump and Joe Biden, but who ended up putting on a better performance than Joe.

“I think Wallace did an abysmal job,” Ted said. “I think he was whiny and petulant. I think he wanted to be the center of attention.”

“I will give him that,” Cruz said.

“But he, it was much more about him than about the debaters.”

Then he dropped the hammer, “And I also think it’s no, it’s not complicated that Chris Wallace is voting for Joe Biden, that his politics are liberal.”

“And he, you know, the snide comments he made after several of Trump’s comments, I think, had no business coming from a debate moderator,”he added.

“And his repeatedly his questions were essentially an oppo research dump, that they were equivalent of asking Trump when did you stop beating your wife, and he didn’t do that on the other side. It was clear which side he was rooting for, and that’s a bad thing for a debate moderator.”

The assessment of Chris Wallace as “moderator” from Senator ⁦@tedcruz⁩ this AM: pic.twitter.com/9AfgwBbmti

The complete audio/transcript of my interview w/ Senator @tedcruz this AM is here: https://t.co/f1rkxV7QyA https://t.co/jw0ymg5eP8