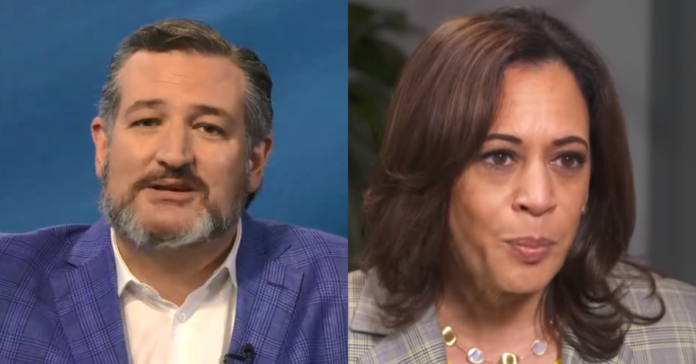 Ted Cruz said the border crisis is the “biggest political mess” Biden has before giving Kamala Harris some wise advice – “My reaction to that appointment is, is, wow, Joe Biden really doesn’t like Kamala Harris,” Cruz said.

Look, Kamala cannot win here because the only solution is to go back to the Trump rules that worked. nBut the Dems and Biden and Harris, in particular, spent so much time portraying Trump’s border policy as monstrous they cannot use Trump’s procedures or risk the base turning on them.

And for someone with her eyes on 2024, like Kamala, this is a bad spot almost as if Biden gave it to her on purpose to kneecap her ambitions of running in 2024. Cruz said, “My reaction to that appointment is, is, wow, Joe Biden really doesn’t like Kamala Harris. This border crisis is the biggest political mess Joe Biden has.

“It threatens to derail the entire administration. So what does he do? He looks to his vice president and says, you take it.

“It’s your problem now, and listen, unfortunately, she is not going to be able to solve this crisis. Why? Because they’ve created this crisis because of their political partisan commitments that they can’t back away from.

“So why are we having this crisis at the border? Because when Joe Biden got elected, the first thing he did was stop construction of the border wall.

“He reinstituted ‘Catch and Release,’ the failed policy, so that now when we detain illegal immigrants, we let them go.

“We give them a court date sometime in the future, and many of them never show up, and he ended the ‘Remain in Mexico’ policy, which was this incredibly successful foreign policy accomplishment where the Trump administration had negotiated with Mexico that illegal immigrants from Central America would remain in Mexico while their asylum proceedings were moving forward.

“All of those had produced real success.

“I mean, that’s the only option that is consistent with the political promises she’s made, and I’ll tell you, representing the state of Texas, we are seeing illegal immigrants being released in Harlingen, Texas.

“The illegal immigrants they’re releasing are testing positive for COVID-19 at a seven times higher rate than the U.S. population. It is a humanitarian crisis,” he said.

Ted Cruz on his choice to – Jen Psaki-style – not play the mask game while speaking in front of reporters:

"At some point it just becomes theater. It becomes a virtue-signal as people wear two, three, and four masks … people have gotten really crazy about this stuff." pic.twitter.com/x46px7GifO