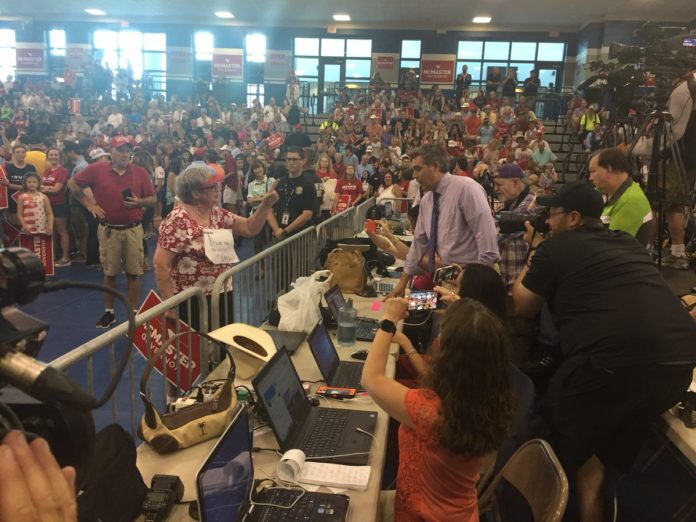 Trump is a few hours away from holding his rally tonight in South Carolina. As usual, there is a huge crowd who waited a long time to get inside the arena.

The media is there of course and one brave Trump supporter decided to tell Jim Acosta exactly what she thinks of CNN.

While Jim Acosta was on the air with CNN’s Wolf Blitzer, a rally goer displayed her “CNN Sucks sign in view of the camera. Elsewhere, chants of “go home, Jim” were heard. Acosta managed to brush off the encounter while on air, mentioning how fired up the crowd at the rally is.

Other journalists attending the event commented on the hatred being directed at Acosta. Henry Gomey tweeted:

The early crowd here at Trump’s South Carolina is jeering CNN’s Jim Acosta as a woman near the press pen just starts going off on him. Now chants of “Go home, Jim!”

The early crowd here at Trump’s South Carolina is ally is jeering CNN’s Jim Acosta as a woman near the press pen just starts going off on him. Now chants of “Go home, Jim!”

Sitting next to @Acosta is the … ahem … "best" seat in the house. Frequent chanting of "@CNN sucks," "Go home, Jim," after which many have then asked for selfies and autographs. 🤷‍♀️😂 #SCGov pic.twitter.com/lo76znlmvi

Here is the video…too funny.