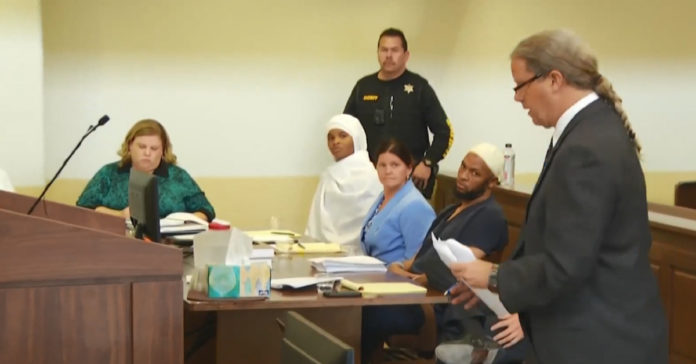 Hoa many times does one man have to be right before he gets any credit from the media? With Trump, the answer may very well be never but that doesn’t make him any less prescient.

NPR has a good recap of what happened in case you missed it: Eleven children were found in the compound during a police raid in the town of Amalia, in Taos County, N.M., on Aug. 3. The children ranged in age from 1 to 15. Three days later, a toddler’s body was discovered on the premises.

The compound is in Amalia, an isolated unincorporated community 145 miles northeast of Albuquerque.

Authorities and court filings allege that the compound featured a makeshift shooting range and that Siraj Wahhaj trained the boys who lived there to handle assault rifles as part of a plan for them to carry out school shootings. County Sheriff Jerry Hogrefe says the group is “considered extremist of the Muslim belief.” No terrorism charges have been filed.

“[Siraj Wahhaj] poses a great danger to the children found on the property as well as a threat to the community as a whole due to the presence of firearms and his intent to use these firearms in a violent and illegal manner,” wrote prosecutor Timothy Hasson in court documents.

But today it got even worse because ICE just released the information that one of the suspects is an illegal immigrant and has been for 20 years.

A Haitian woman who was charged with child abuse at a New Mexico compound has been taken into custody by immigration authorities after living in the United States illegally for over 20 years, immigration officials said on Wednesday.

“Leveille has been unlawfully present in the U.S. for more than 20 years after overstaying the validity of her non-immigrant visitor visa,” according to an ICE statement.

Leveille was initially detained on Aug. 3 after police in Taos County raided the ramshackle settlement where she was living with her husband and six children, whose ages range between 15 and 1 years old, according to her brother.

Police said the children had no food or clean water, an allegation disputed by neighbors and relatives of the family. Three days after the raid, police unearthed the body of a toddler at the compound.

The body is believed to be that of the 3-year-old son of Leveille’s husband, Siraj Ibn Wahhaj. Wahhaj is accused of abducting the severely ill boy from his mother in Georgia in order to carry out faith healing on him. In court testimony on Monday, a Federal Bureau of Investigations agent said the boy died in February in a healing ritual carried out by Ibn Wahhaj at the compound.