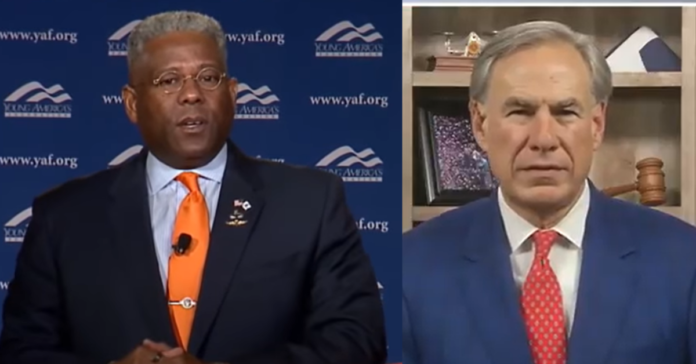 Allen West, the chair of the Texas Republican party, has abruptly resigned his position after leading the GOP in the state for around a year. He will remain at the head of the party until July 11th when they will select a new chair.

“Chairman West expressed his humble gratitude and stated that “it has been my distinct honor to serve as Chairman of the Republican Party of Texas. I pray Godspeed for this governing body.”

“His tenure has been marked by a remarkable commitment to our grassroots organizers as well as tireless effort to make gains on our Legislative Priorities such as Constitutional Carry, the Heart Beat Bill, and Election Integrity.

“Additionally, his action to grow GOP support across the state from the Rio Grande Valley, to our rural base, and underserved urban areas has been dauntless.

“Lt. Col. Allen West will take this opportunity to prayerfully reflect on a new chapter in his already distinguished career.

“We know that wherever he goes next, he will continue to be a bulwark against progressive socialism and a champion for the principles of Texas and our American Republic.

“The Republican Party of Texas wishes to express our sincere gratitude for his numerous contributions during his tenure. His efforts have been greatly appreciated by staff and grassroots alike,” the release said.

Lieutenant Colonel (Ret) Allen B. West is a Christian constitutional conservative, combat veteran, and former Member of the US Congress.

His life has been defined as one of service, sacrifice, and commitment to this Republic, the United States of America. He believes it will be conservative, free market policies, not politics that secures a sound economic future for Americans – with growth, opportunity and returning the promise of the American dream for this generation and those to come.

Vice-Chair of the Republican Party of Texas Cat Parks said: