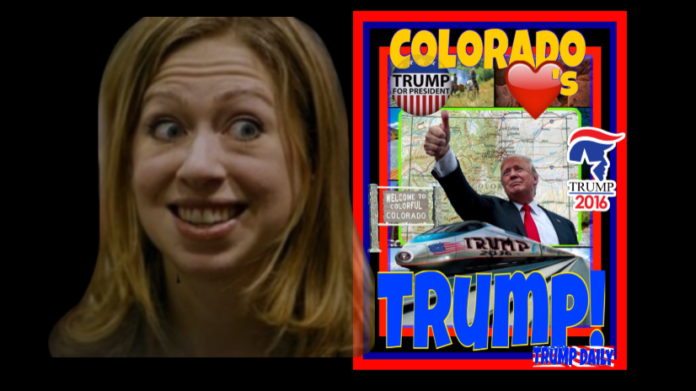 In recent days Donald Trump taken the lead (depending on which poll your looking at) in five very important swing states.  North Carolina, Ohio, Nevada, Iowa and Colorado have Trump a little ahead, a little behind or just about even as of this writing.  This is great news for the Donald Trump campaign.  It is especially great news in Colorado, a state long considered too far gone to the Democrats for Donald Trump to have a chance.

According to a new Colorado CNN poll Monday, Mr. Trump is leading in Colorado by a 42 to 41 margin with Libertarian candidate Gary Johnson at 13 percent and Green Party candidate Jill Stein at 3 percent.  (source:Daily Caller) 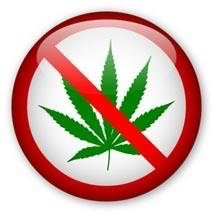 Well, now Chelsea Clinton has really helped our cause.  Yesterday in Utah, next door neighbor to Colorado, she gave a lecture on the dangers of marijuana and her mother’s intent to pass tougher federal laws regarding the controversial drug/herb.   Now how dumb can you get? Thank you Chelsea!  Really, thank you very much from the bottom of our Trump loving hearts hearts.  You know a lot of Colorado voters are NOT going to like that.  And you know which Colorado voters aren’t going to like that?  The one’s that were going to vote for her MOTHER!  LMAO.

She even went so far as to say MARIJUANA KILLS!  No, Chelsea it doesn’t kill people but….. 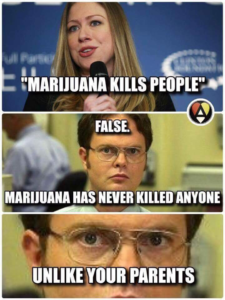 This is just a joke folks……. hopefully.
Donald Trump has never had a drink or done any drugs in his life and none of his kids have either (supposedly) and we know he is no proponent of marijuana but do you think he would point that out and make a big issue out of it?  Of course not.

So again THANK YOU Chelsea!  Way to go. 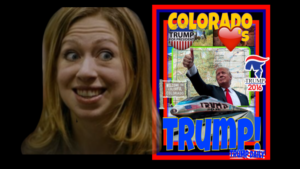 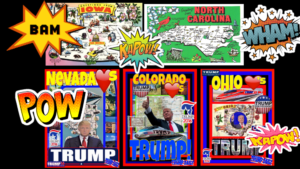