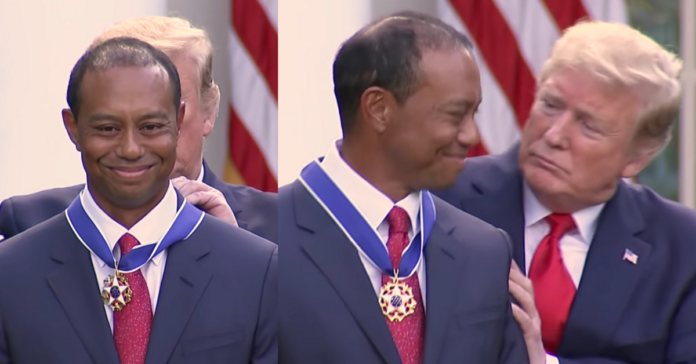 Trump’s good buddy Tiger Woods, and one of the few celebrities who stayed with Trump despite the media trying to ruin anyone who associated with him, is in the hospital after suffering injuries in a car accident this morning in LA.

He had to be rescued by paramedics using the jaw of life and he was rushed to a hospital. Some reports were saying he was airlifted but that is not confirmed yet.

“The vehicle sustained major damage,” the Los Angeles County Sheriff’s Department said. The accident occurred shortly after 7 am this morning – it was a single-car accident so no one else was injured.

In a statement, the sheriff’s department said: ‘On February 23, at approximately 7.12am, LASD responded to a single vehicle roll-over traffic collision on the border of Rolling Hills Estates and Rancho Palos Verdes.

‘On February 23, at approximately 7.12am, LASD responded to a single vehicle roll-over traffic collision on the border of Rolling Hills Estates and Rancho Palos Verdes.

‘The vehicle was traveling northbound on Hawthorne Boulevard, at Blackhorse Road, when it crashed. The vehicle sustained major damage.

‘The driver and sole occupant was identified as PGA golfer Eldrick ‘Tiger’ Woods.

‘Mr. Woods was extricated from the wreck with the jaws of life by LA County firefighters and paramedics, then transported to a local hospital by ambulance for his injuries.’

Tiger Woods was injured in a single vehicle roll-over accident today, per the @LMTLASD. Woods had to be extricated from the crash with the “jaws of life”, police said. pic.twitter.com/xhUu4oA19f

This morning @LMTLASD responded to a roll-over collision in which @TigerWoods was injured. Please see our statement… pic.twitter.com/cSWOxKZC1w