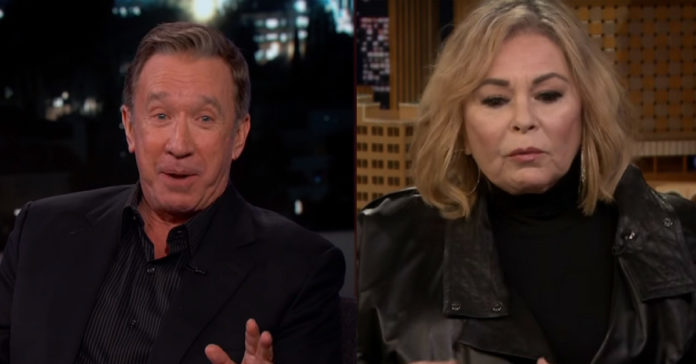 Tim Allen is back at his old job playing a conservative on television. Can you believe Hollywood turned down the money that came with his hit show and canceled it?

They never do that – but then again being a conservative is an unpardonable sin out there.

Roseanne, however, does not have her show back and it is a sad statement on today’s culture that 40 years of good deeds can be wiped out by one mistake.

Tim Allen is opening up about the other conservative sitcom star whose show was canceled by ABC — Roseanne Barr.

Asked whether the network was right to fire Barr over her racist tweet last May, Allen replied, “I go way back with Rosie and that’s not the Rosie I know. She was the most diverse and tolerant woman I’ve ever known for a long time. Whatever got in her head isn’t the Roseanne I know.

It’s a very icy time. I’ve been a comedian for 38 years and I’ve never seen it, like Lenny Bruce said at the Purple Onion, ‘We’ve gone backwards.’ There are things you can’t say. There are things you shouldn’t say. Who makes up these rules? And as a stand-up comic, it’s a dangerous position to be in because I like pushing buttons. It’s unfortunate.”

Later, Fox had a panel for the upcoming comedy The Cool Kids, which co-stars Martin Mull — who had a long-running role on the original Roseanne series. We asked Mull the same question. “They did what they had to do,” Mull says. “My own dealings with Rosie never indicated to me anyone who would write that tweet. I certainly don’t approve of the tweet. I never saw that in her. But I did see things in her that were inexplicable.”

Here’s more from the panel for Last Man Standing:

— The Baxter family will be joined by a foreign exchange student from China this season. “So basically we have a different political system who will come in,” says Abbott. “Mike Baxter will try to promote the American way.”

— On whether Allen’s character is a Trump supporter: “It’s a legitimate question,” Allen says. “I think the guy is a centrist … he’s probably pro-Trump. He probably doesn’t defend him. He’s for whatever is good for his business and for the state of Colorado. I’m not the character I play. Keanu Reeves didn’t actually murder 100 people in John Wick. What’s interesting to me is pissing people off.”

Tim Allen On Trump: “It took this type of guy to get stuff done.”