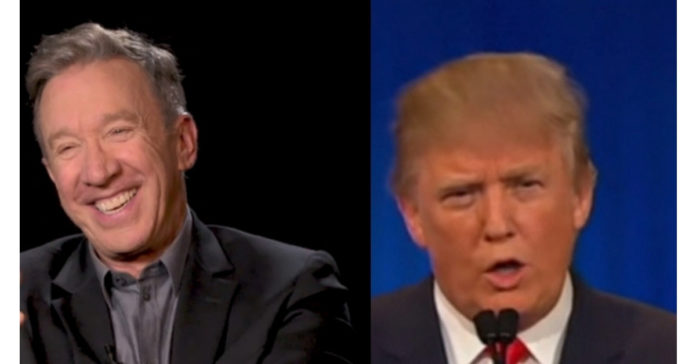 Tim Allen does not suffer fools. He is a talented and wise man who had his show canceled because of his conservative views.

Believe me, that is the original sin out in Hollywood. And also know this: no one cancels a gravy train hit sitcom.

They are cheap to produce and do well in syndication and are absolute cash cows. Thankfully, Fox saw through the nonsense and Tim is back on the air.

He recently sat for an interview to promote his new show and the question of Trump came up.

Q: But you’re assumed to be a Trump supporter, and you did attend his inauguration. So I guess what I’m wondering is … it’s been a year and a half, after all we’ve seen, as a self-described “fiscal conservative’ in Hollywood whose TV show dabbles in political humor: Are you a Trump fan, at this point, or not?

A:You know … it’s a very loaded question. I’ve met [Trump] at the charity event years ago, and that certainly doesn’t fit with the man who tweets. I’ve met a lot of people in private whose public persona is a bit off. My perception is “let’s see what he gets done.” Let’s stop banging on the pilot’s door and trying to pull the guy out of his seat while he’s still flying. You might not like how he’s flying the plane but let’s let him land it. Do I like him or agree with him? … I don’t know.

Somebody got this NAFTA thing done. How did that happen? It’s like a slight of hand with this dude. There’s this smoke and smelly food but over here he just fixed a pothole. The theater of this is fascinating. He doesn’t do it very attractively but you don’t even realize the economy is doing better. Is it? There’s so much drama. Maybe it took this type of guy to get stuff done because it was so stuck in the mud. I’m just watching the theater of it and trying to keep my personal opinions out of it. What difference does it make whether I like him?

I’d just want to say again: It’s not a political show. We talk about politics because everybody does. If you want to see me talk politics, come see me at The Mirage in Las Vegas, or any of the concerts that I do throughout the country. My politics are really irrelevant. What I do in my family, what I do in my neighborhood, that may be more of an indication of what I believe. But I wouldn’t want who say, “I can’t stand Trump so I can’t watch this show.” Try to table that. It’s a sitcom that’s really clever where we work hard to make you laugh your ass off.