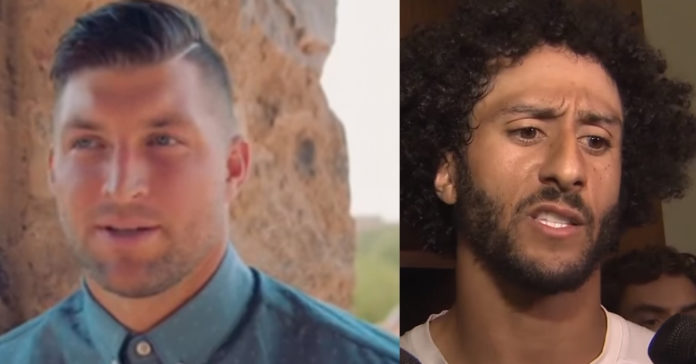 Tim Tebow continues to impress as he is lighting up the baseball diamond. Tim does things the correct way, not the popular way.

He is not driven by fame and fortune like so many are these days. In short, Tebow has credibility.

As reported by Politifeed: Tim Tebow has been out of the NFL for years now but is still making an impact across the world when he’s off the Baseball field. Most people don’t realize that Tebow gives in such a way to so many people that he embodies the true representation of someone who sacrifices everything because he believes in something.

That right! Tebow is a true hero who sacrifices on and off the field for others and for what he believes in. Our Lord and Savior Jesus Christ.

Tebow wasted no time in posting a video to bring some encouragement to those who may need it during these controversial times.

Now his fans are asking Nike to make him their new poster boy. Instead of Colin Kaepernick.

There’s so many good things to point out in this video that I’ll leave a few of my favorite nuggets here. The entire video is posted right after.

Tebow starts by sharing an illustration on life.

“It’s about two dates. The day you are born and the day you die. What really matters is the dash in-between. It’s so much more than just a dash. The dash represents just us. But if our life is only about us it’s already worthless.”

“We live in a time where it’s so easy to get caught up in me and mine. Money fame and power and what benefits me. Then i’m brought back to so many moments in the Bible where Jesus was so countercultural when He says, ‘do you really want to be filled up? Then go serve!’”

Just a quick encouragement for you guys… It’s not about what you have, it’s about the lives you impact! Tim Tebow Foundation