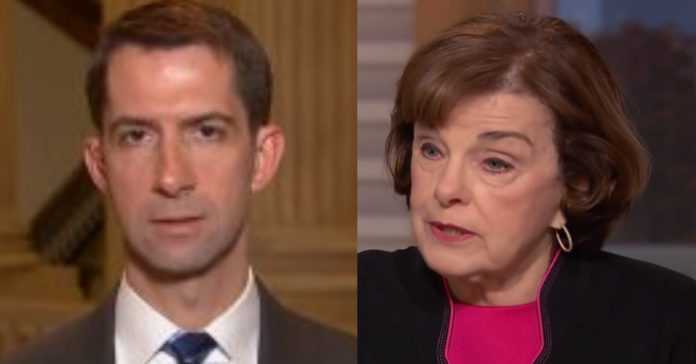 Tom Cotton does not suffer liberal fools. Not now, not ever. He stands tall when they go low and he is breaking his silence on the whole Kavanaugh disgrace.

As reported by the Washington Examiner:

Rep. Tom Cotton, R-Ark., said Monday that the vote should move forward on Supreme Court nominee Brett Kavanaugh’s confirmation in light of more allegations that he says show a “character assassination” of the judge.

“The Democrats are engaged in a campaign of delay and character assassination against Judge Kavanaugh,” Cotton posted to Twitter Monday morning. “It’s time to vote this week.”

Democrats have been looking to delay Kavanaugh’s confirmation until after the 2018 midterm elections, where they hope to take back a majority in Congress and block the Supreme Court nomination.

Ramirez claims that Kavanaugh exposed himself to her at a college party at Yale, but says she was hesitant to come forward because she was drunk and did not fully remember all the details of the incident.

Although she went to the press with her story earlier in the month, the story was not published until Kavanaugh’s confirmation was already stalled by Christine Blasey Ford’s allegations.

Ford went public with her allegations last weekend, shortly before the Senate Judiciary Committee was scheduled to vote on Kavanaugh’s confirmation, but she told lawmakers and media about the incident earlier in the summer.

The 51-year-old professor alleges that Kavanaugh drunkenly groped her at a high school party 36 years ago.

The Democrats are engaged in a campaign of delay and character assassination against Judge Kavanaugh. It’s time to vote this week.