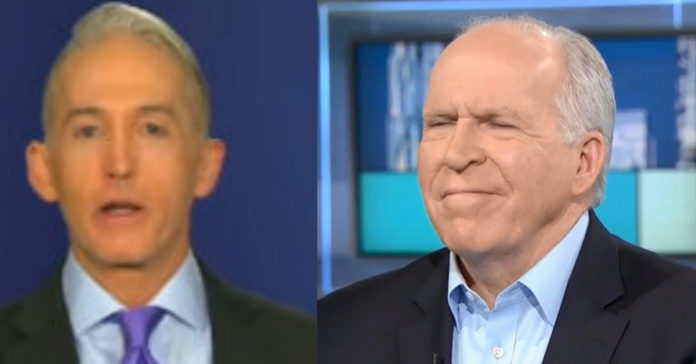 John Brennan has zero credibility. We all remember when he lied about what information our government was and is collecting on us on a daily basis a few years ago.

To Congress, under oath.

Yet the media still treats him like a valued expert rather than a known liar as he relentlessly bashes Trump.

Enter Trey Gowdy. As reported by The Washington Examiner:

“I don’t think it’s going to change anyone’s mind, but I’ve seen nothing in it that is going to jeopardize the national security interest of this country,” Gowdy said.

Despite downplaying the documents, Gowdy conceded that he thinks there is one document related to George Papadopoulos, a Trump campaign adviser who pleaded guilty to lying to the FBI about his contacts with Russians, people will find interesting, though he did not elaborate. It was his boasting to an Australian diplomat in a London bar in May 2016 that the Russian government had dirt on Democratic presidential candidate Hillary Clinton that triggered the federal Russia investigation.

The declassification order from Trump came on Monday, instructing the Justice Department, the FBI, and the director of national intelligence to declassify documents related to the FISA warrant process seeking the authority to spy on onetime Trump campaign aide Carter Page, who had suspicious ties to Russia.

Gowdy, a member of the House Intelligence Committee and chairman of the oversight panel, emphasized that while there may not be any damning details in these documents as some of his Republican colleagues have assured, he did say that there will be information that will be embarrassing for some individuals in the FBI and DOJ. And he singled out ex-CIA Director John Brennan as the one who faces the brunt of the embarrassment.